On the morning of August 3rd, 2014, ISIS attacks the city of Sinjar and begins to massacre the inhabitants, most of them from the Yazidi religious minority. Over the following days, ISIS slaughters more than 5,000 people and an additional 5,000 are enslaved. 200,000 people manage to escape.

The Exemplary School of Sitak

Alright. Let’s not beat around the bush, Mohammed is a displaced person.

He only learned about what happened in Mosul after he left. “I didn’t see ISIS close-up; I didn’t see murder or destruction. I knew that they had entered Mosul so I returned to my city, Sinjar.” Mohammed is a devout Kurd who studied Quranic Science at the University of Mosul, so I asked him why he ran away from the attackers who are also Muslim. He rejects the comparison. “They killed women and children. What kind of Muslim would blow-up a mosque?” he asks rhetorically, but then quickly adds “I didn’t actually see that, I only heard of it.” 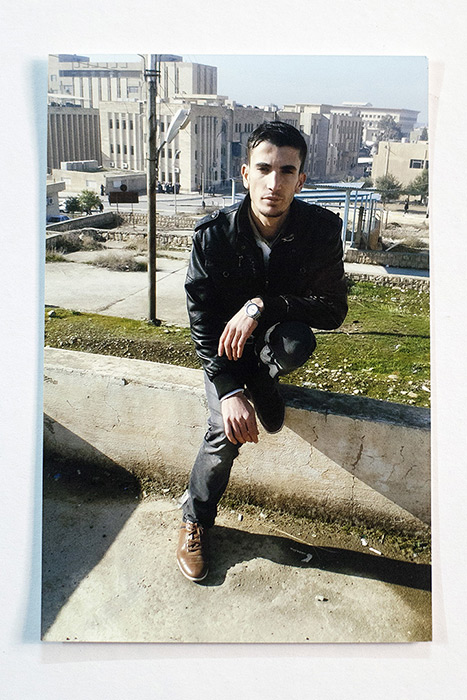 So these people have a special agenda? Probably supported by major powers?

“Definitely. They have weapons that even the Iraqi Army doesn’t have! But I don’t want to start a political discussion, I hate politics.”

– OK, how do you remember Mosul?

“With everything it had! I loved that city despite its unstable situation which, by the way, actually started before ISIS came. Car bombs, kidnapping, murders…”

He starts recalling the places that he loved: forests, entertainment facilities, touristic places, markets, and the Shrine of Prophet Jonah.

Why did you choose to study Quranic Science?

“Let me be frank.” Mohammed is always frank. “I wanted to study history, but my grades weren’t good enough, so I chose to become a teacher.” 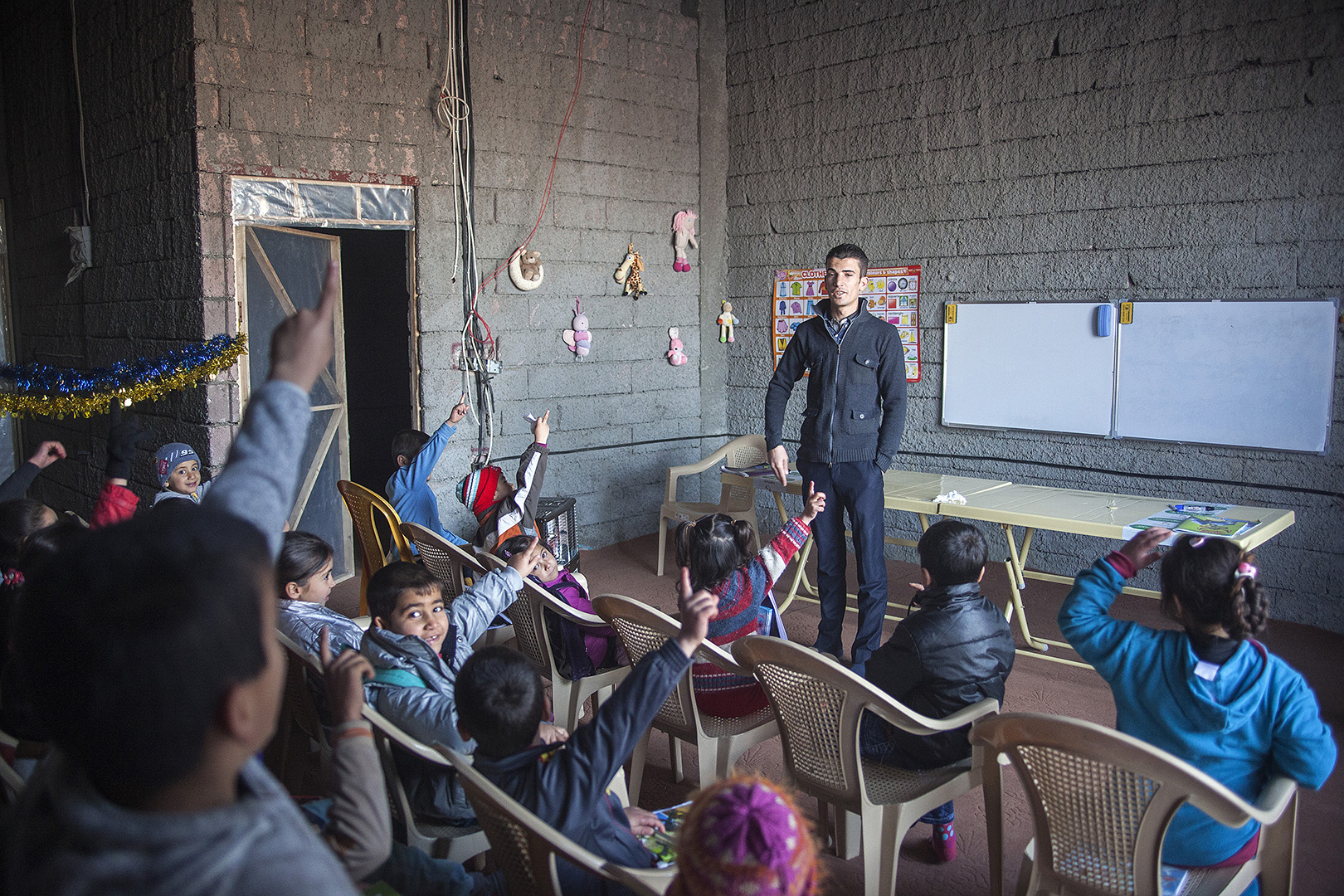 26/01/15. Sitak, Iraq. Mohammed 23 yo. teaches inside the class room he has created at the unfinished building where him and 11 other families have been living since they left Sinjar in August 2014.

I point at the place where we’re sitting, where ‘Mr. Mohammed’, as his students call him, receives us. A few of them sing a song, in real harmony, about a beautiful house somewhere far away – an image from a beautiful dream to inspire their imaginations, something that Mohammed wants to implant in their souls.

Being his ever frank self, Mohammed says that it’s hard to call this place a ‘school’: “I don’t use school textbooks, but the important thing is that the children learn something. They won’t have missed that much when we return to Sinjar mainly because the level of education is quite bad over there. There are fourth and fifth graders who can’t spell a word while our first graders here have started learning letters and words already. In addition to that, I focus on other activities such as drawing, sports and hymns to distract them from the current situation and let them know that life goes on.” 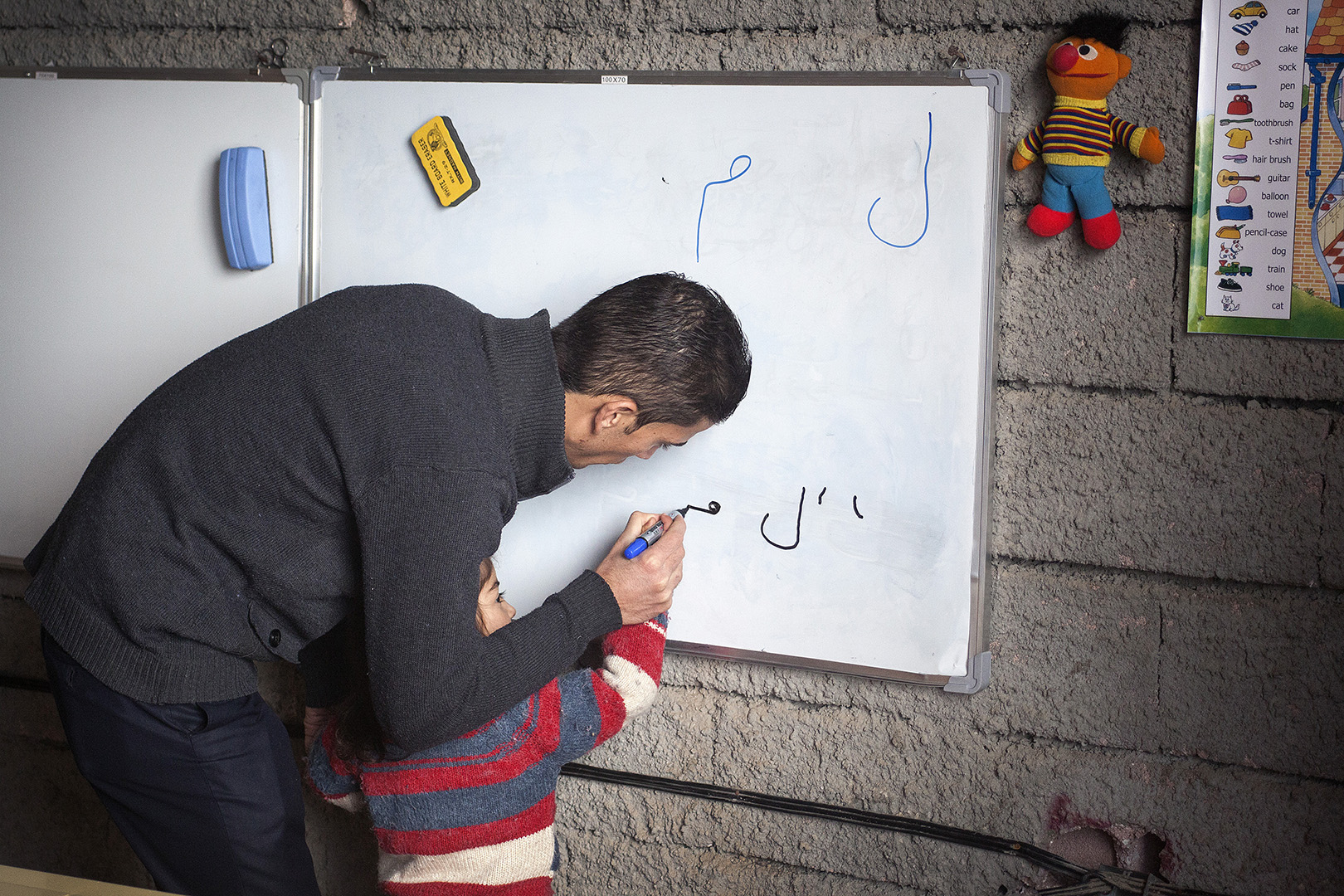 26/01/15. Sitak, Iraq. Mohammed 23 yo. teaches inside the class room he has created at the unfinished building where him and 11 other families have been living since they left Sinjar in August 2014.
+ 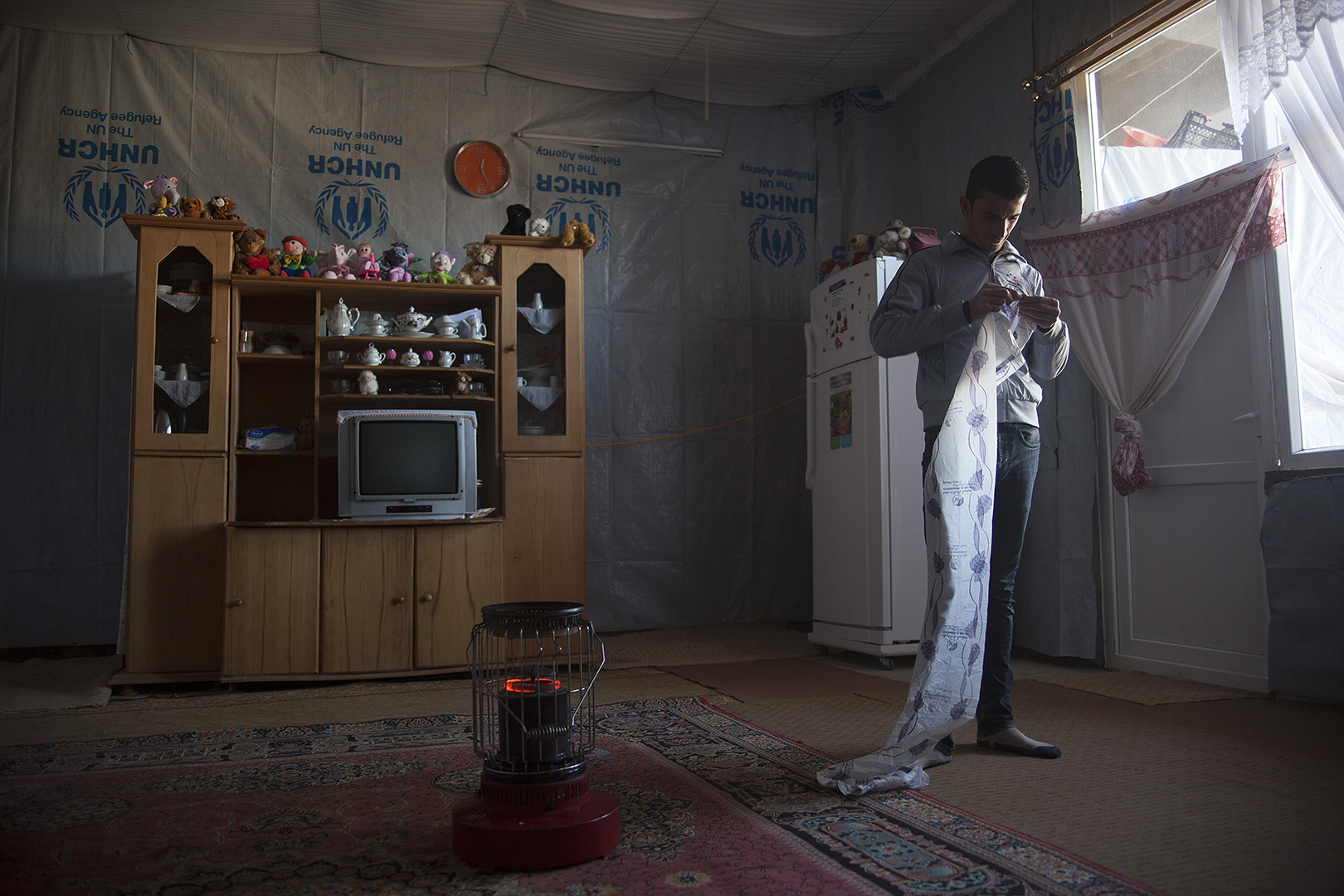 Alright. Let’s turn off the TV and set aside the news, analysts, politicians and those who deal in blood. Wars are not solely the red images of ruin and death – with all respect for those who have died, nor are they only about children searching for their parents or digging in dumpsters to survive. These too have taken their sufficient share of attention, but now they have become cards for the wailing politicians to play with. The time is no longer right for wailing or mourning over ruins.

Amer, the middle son in Mohammed’s family, spends his days butchering and cleaning chickens in Sulaimaniyah city. Let’s wash up, and make our way up into the hear of nature, towards Tako mountain, going through Peshrow Tunnel that penetrates the heart of Azmar and stretches for two thousand and seven hundred meters. At first you cannot see the light at the end of this tunnel, but it finally appears followed by the town of Sitak, then the building. This motel-to-be was still being constructed when its owner allowed eleven displaced families from Sinjar to inhabit it, improvising modest doors and windows in a hurry. All that Mohammed needs now is a blackboard.

17/02/15. Sulaimanyah, Iraq. Amer 29 Yo. – Mohammed’s brother – works in Sulaimanyah in a chicken monger. Sitak is about 20 KM from Sulaimanyah. Amer goes tot work with a group of other young men who live in the same unfinished building. They work every day except for the Fridays.
+ 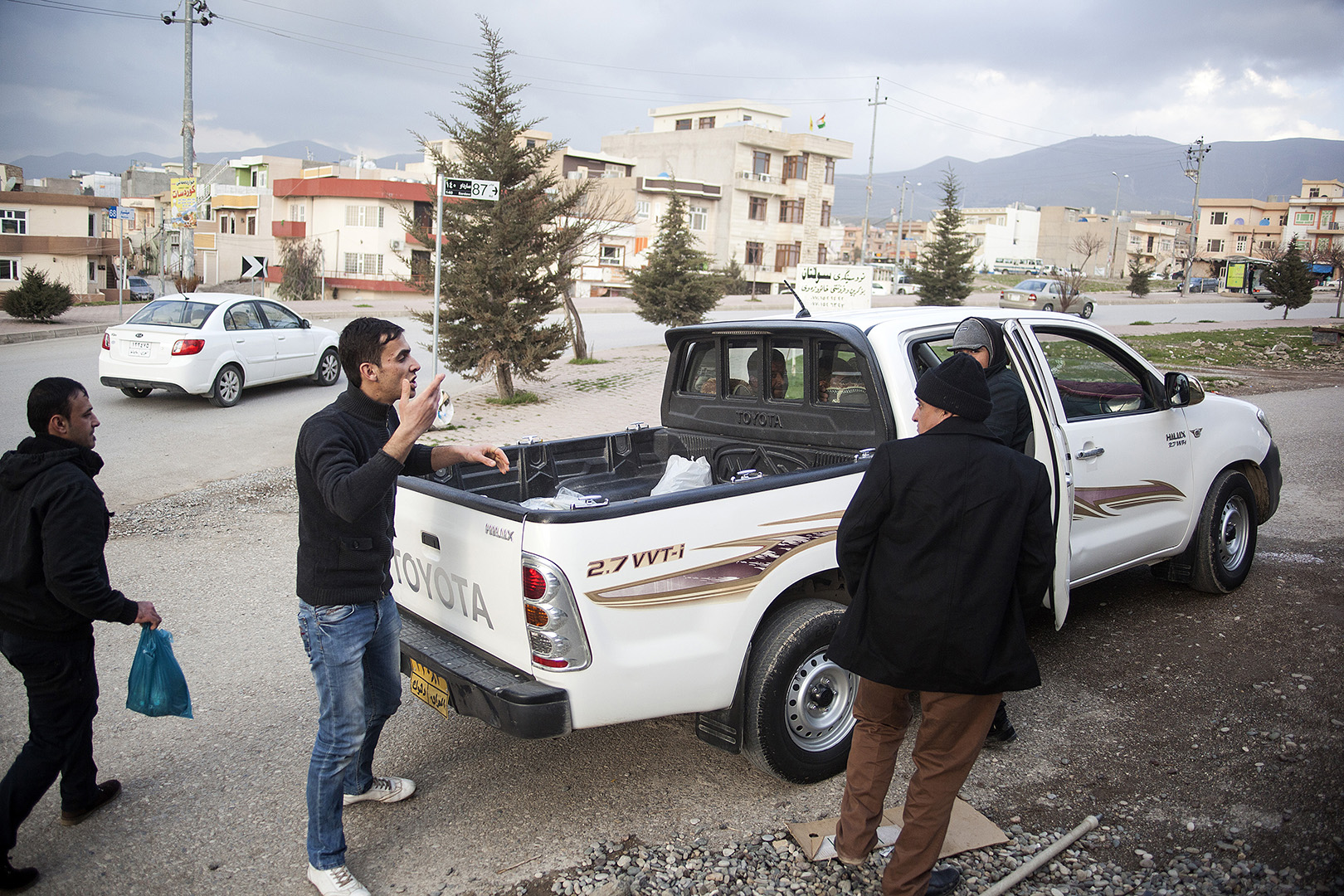 17/02/15. Sulaimanyah, Iraq. Amer 29 Yo. Mohammed’s brother. works in Sulaimanyah in a chicken monger. Sitak is about 20 KM from Sulaimanyah. Amer goes tot work with a group of other young men who live in the same unfinished building. They work every day except for the Fridays.
+ 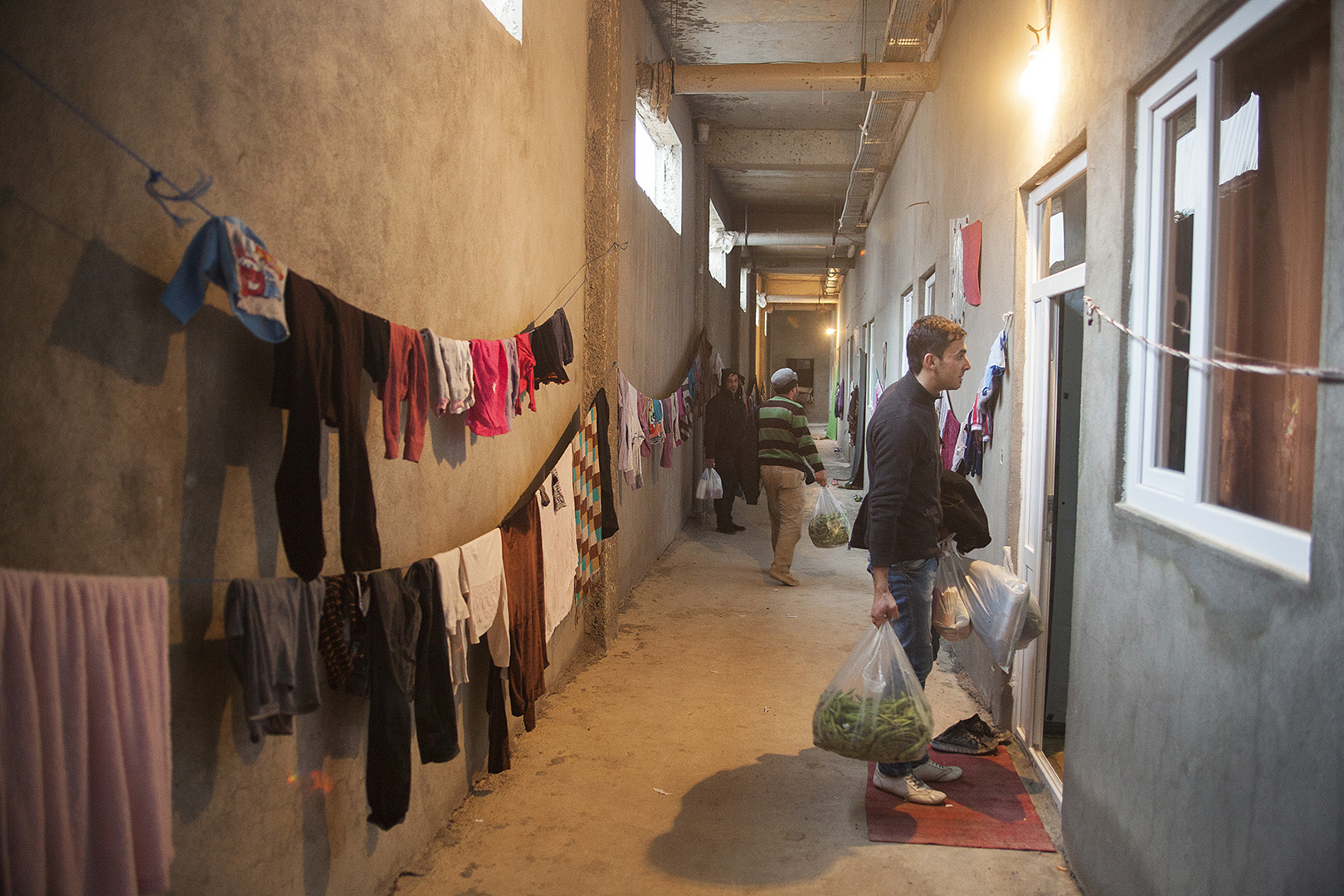 17/02/15. Sitak, Iraq. Amer 29 Yo. Mohammed’s brother bring food back to his family in Sitak after the day spent working in Sulaimaniyah.
+

“Why would we leave the children uneducated?” asked Ali, Mohammed’s uncle who himself dropped out of school in the fifth grade. It was this question that sparked Mohammed’s idea. The families had already settled in and were looking for jobs.

“Adel, my eldest brother, works as a porter. My family never allowed me to work, they focused their time and efforts to help me study. More than once I wanted to leave school and find a job to help our poor family, but they were against it, especially my mother. I’ll never forget the moment she showered me with candy when I passed the sixth grade,” says Mohammed who is now overcome with happiness as if it were happening again.

Mohammed latched onto what his uncle said about education and started working. “I bought a board and started teaching children in the beginning of November, twenty-two children between first and fifth grade. A month-and-a-half later, STEP [a small British NGO working in the Sulaymaniyah area] visited and provided us with stationery, a new board, chairs and a cabinet for books. They kept up their support until we became what you see now.” 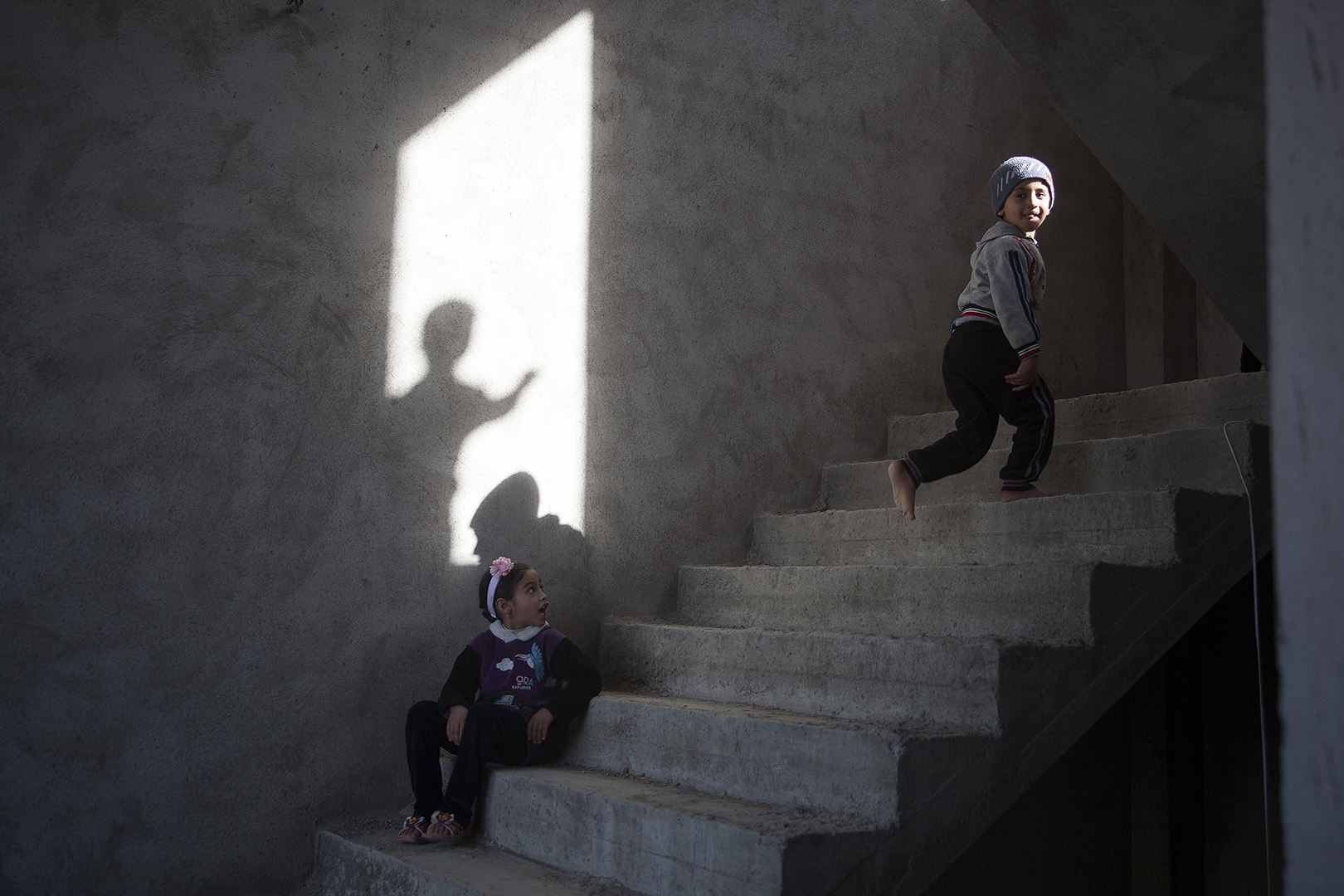 01/02/15. Sitak, Iraq. Children play on an unfinished staircase inside the building where they have been living with their families since August 2014, when they escaped from Sinjar.

26/01/15 — Sitak, Iraq — Mohammed’s mother (right) makes bread. Every few days the women make bread for all the families in the building.

Against popular belief, humans rise, phoenix-like, from the ashes. So be it if ISIS has bombed the Mosque of Prophet Jonah in Mosul. Isn’t this the story of every mosque, house and city in the Middle East? A mosque is built over the ruins of a church which has been built over the ruins of a synagogue which has been built on the ruins of an ancient temple; and someone comes to ruin it all over again. Ruins inherit ruins, and generations follow generations. They rise from the ashes and restore everything, a long feverish struggle for survival. We cannot call it a war because it isn’t, regardless of the fact that we are all fighting for a dream.

Mohammed’s father has a defect in his leg and his mother has one in her hand, but they both managed, aided by Adel and Amer, to build their dream house. It is definitely not a palace; it is just a modest house paid for dinar by dinar over the years, the same way Mohammed was made a student.

Mohammed left Mosul and its university while preparing for the first year exams “delaying” his plans for graduation. He believes that he will achieve this dream one day and that’s why he delayed rather than drop out. Remember, this is not only his dream, but that of his entire family. And for the exact same reason he’s also delayed any plans for love and marriage even though he’s twenty-four, a late age for someone from his culture.

– Don’t you know any girls? Haven’t you ever fallen in love?

“Of course I known girls, but I didn’t befriend any. Friendship, in my opinion, develops into love, relationship, and then marriage, which is something I don’t want right now.” 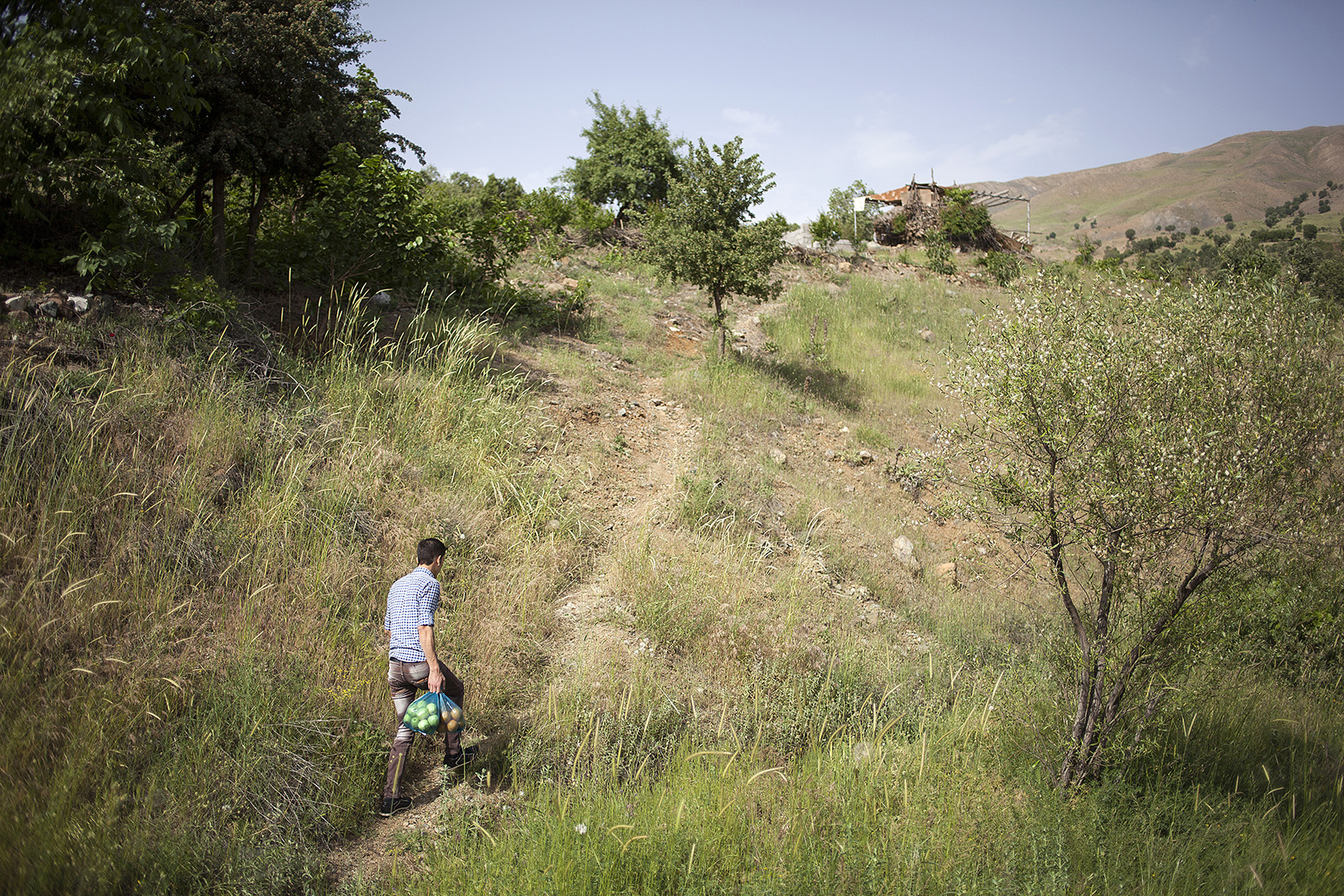 22/05/2015. Sharbazher village, Iraq. Mohammed brings some food to his friends and family. He is helping his aunt to build a small house in a piece of land belonging to them.
+ 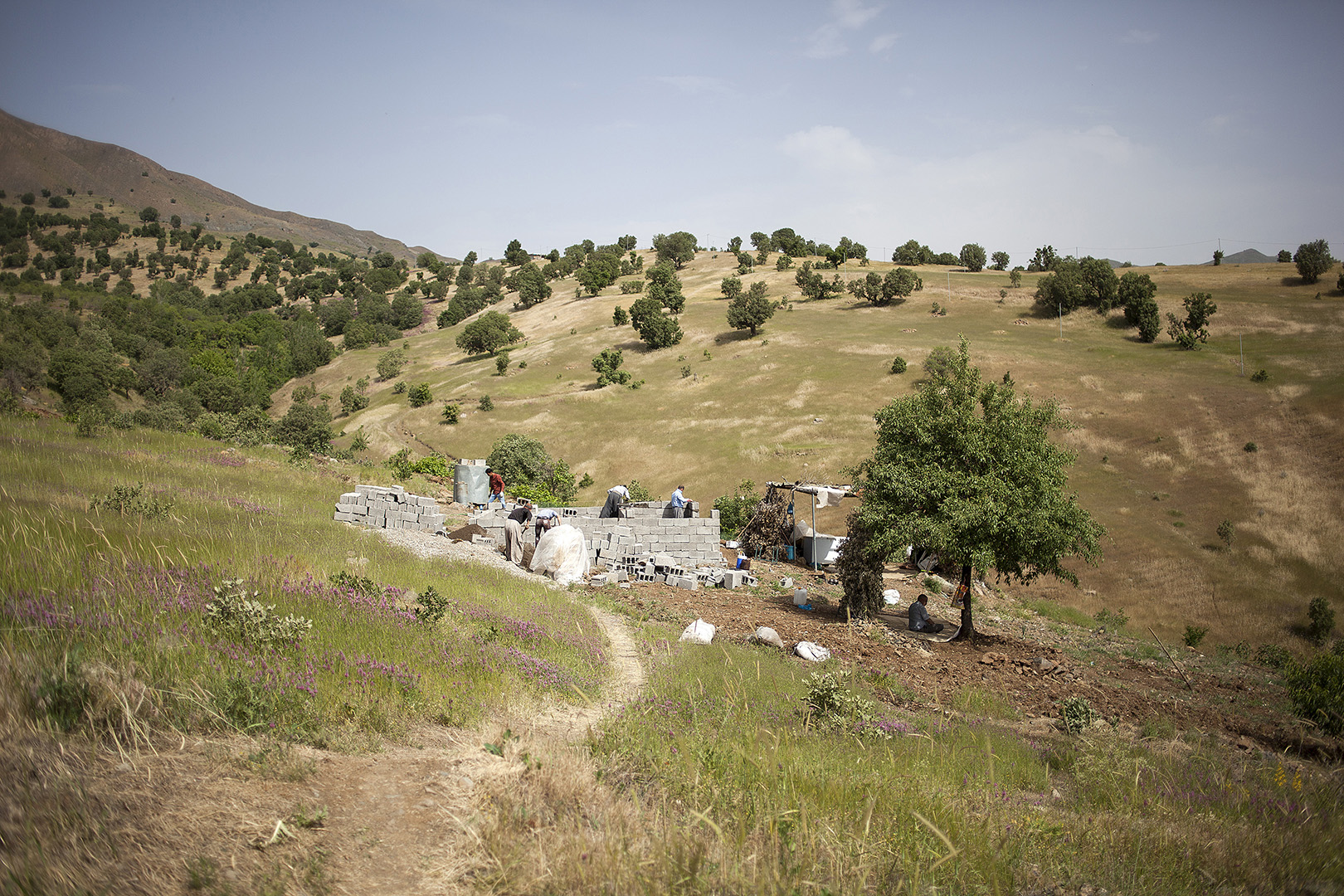 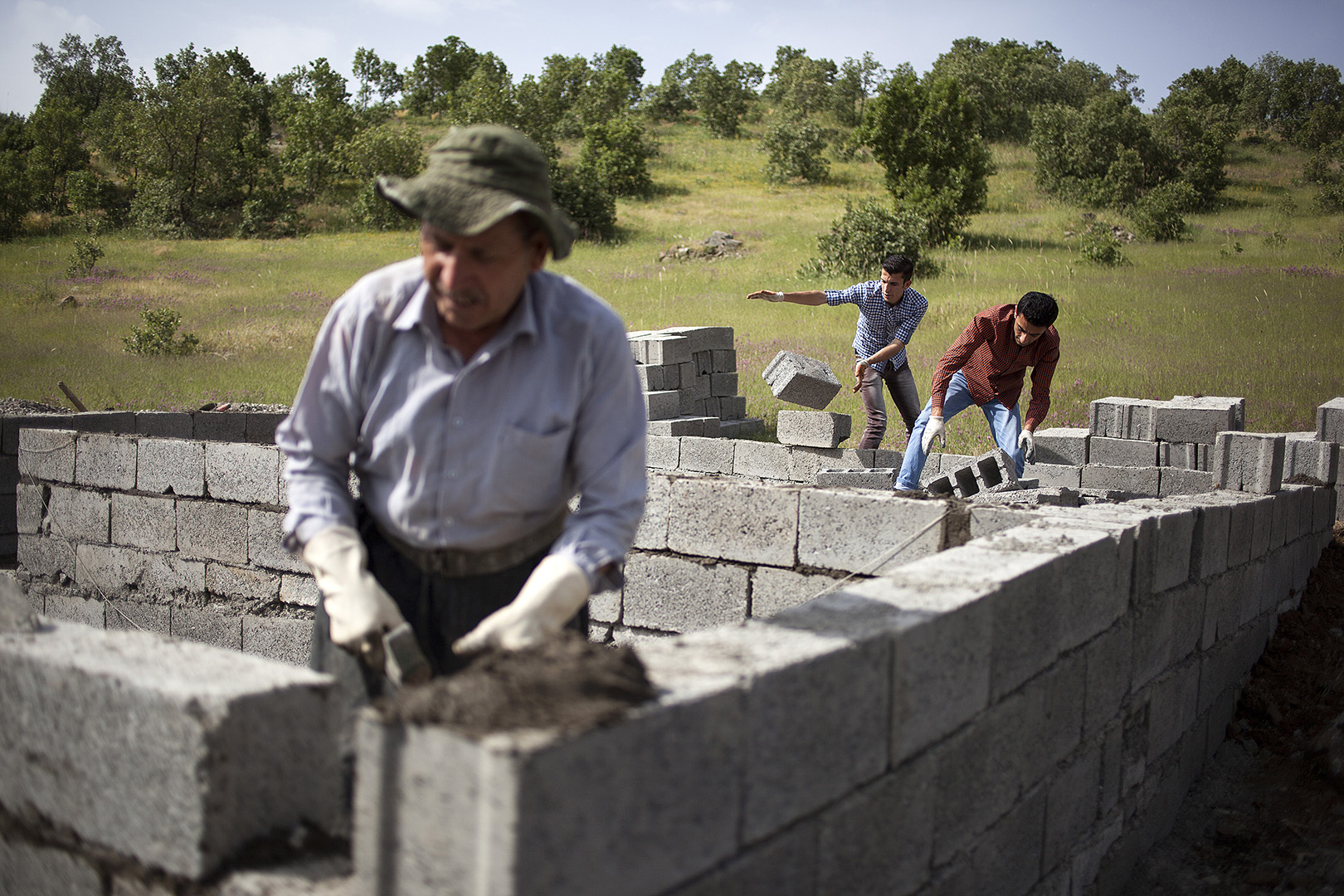 22/05/2015. Sharbazher village. Tea break during the construction of a small house in a piece of land belonging to the aunt of Mohammed.
+ 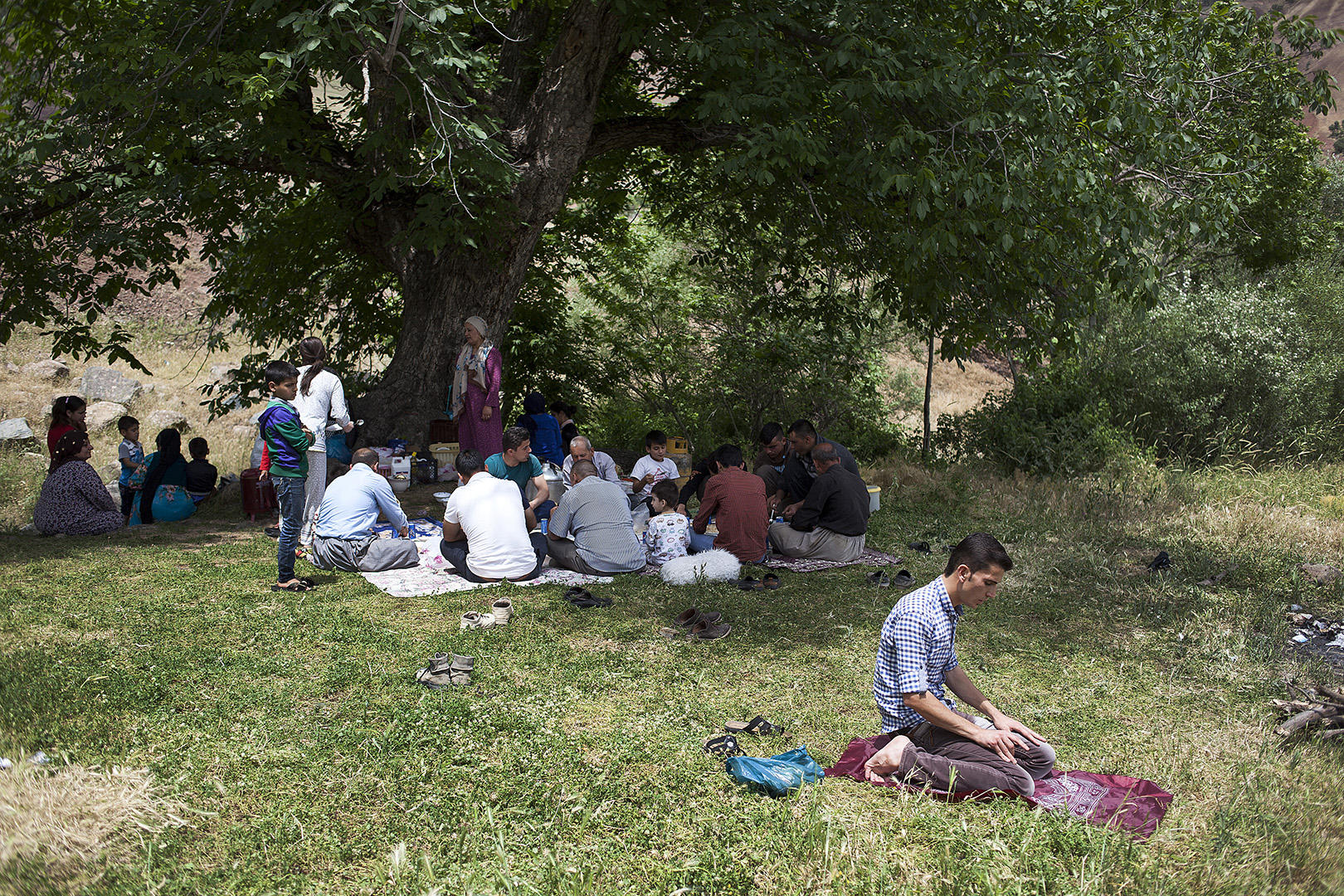 Two months after he left Mosul, he and his family had to flee Sinjar as well, leaving behind the dream house.

“ISIS came to the outskirts of Sinjar; we could see the flashes of bullets at night and hear the fighting. We knew they were going to enter our city, so on the 3rd of August we left.”

– How did you manage to get out with ISIS so close?

“We put our faith in God and left. We were very scared since we had to pass through their checkpoints but they didn’t stop us because we weren’t fighters. There were seventy of us – Old men, women, young people, children and babies, all relatives. We took whatever cars we could find and left. It was August and unbearably hot. We arrived in Duhok where we spent the night and then proceeded to Sulaymaniyah. We chose this city primarily because we have relatives here. They own the place we live in and they equipped it so we could live here. They helped us settle in when we arrived and haven’t charged us any rent.” 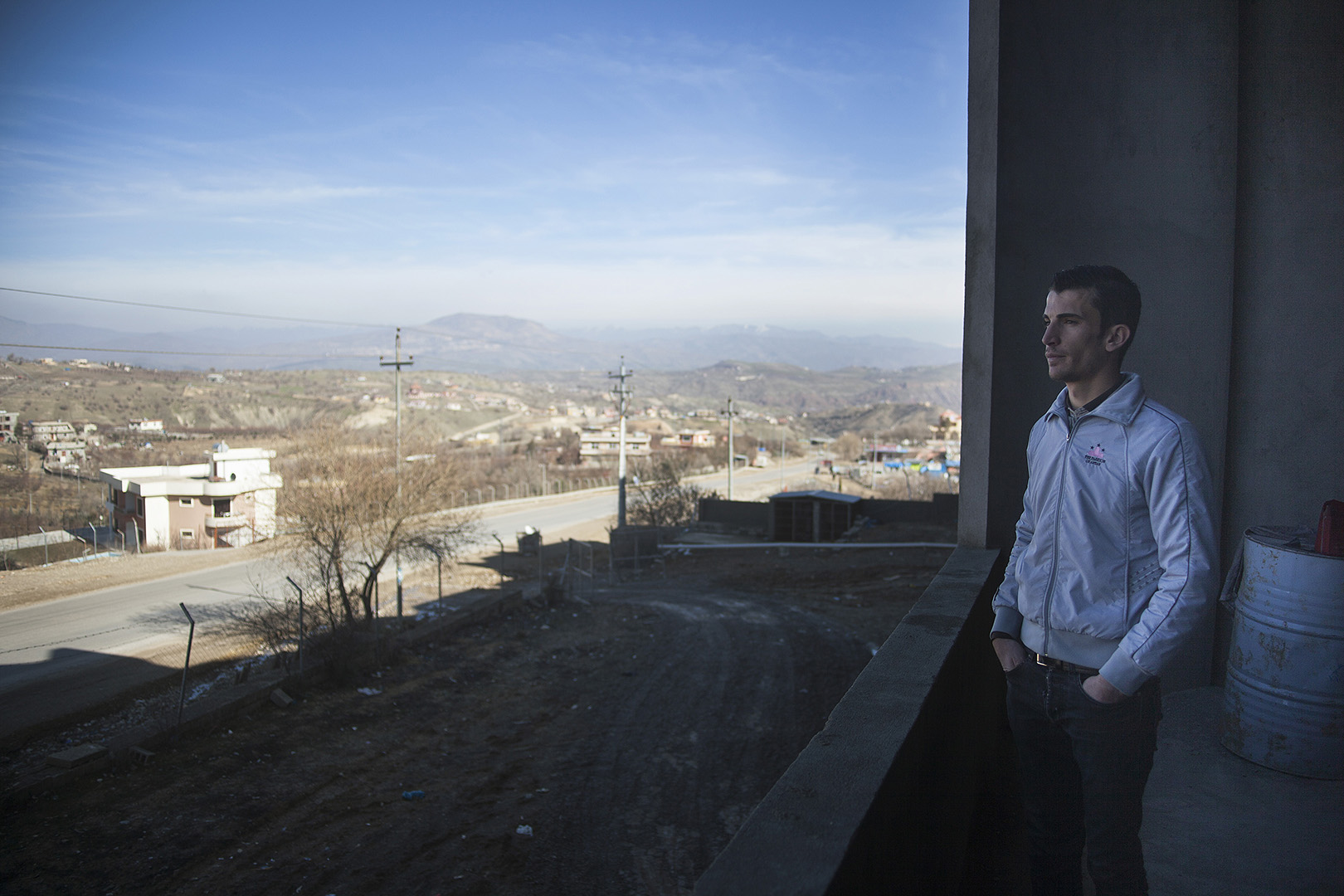 When you see the place for the first time you are somehow frustrated and depressed: you move from the darkness of the tunnel into the light of nature and you’re surprised by this building with its laundry ropes tightened over the dusty walls. You enter the ‘school’ and meet Mohammed and his pupils and the noises of speeding cars on the road fade into vague sounds coming from a strange far away place. The sound of one rooster becomes stronger and closer when he suddenly and untimely crows in the yard. You look out on the balcony and realize that the air is purer. You greet the people and walk down the street, gesture to the speeding cars and their mindless drivers to pull over, not to pick you up this time, but to tell them: 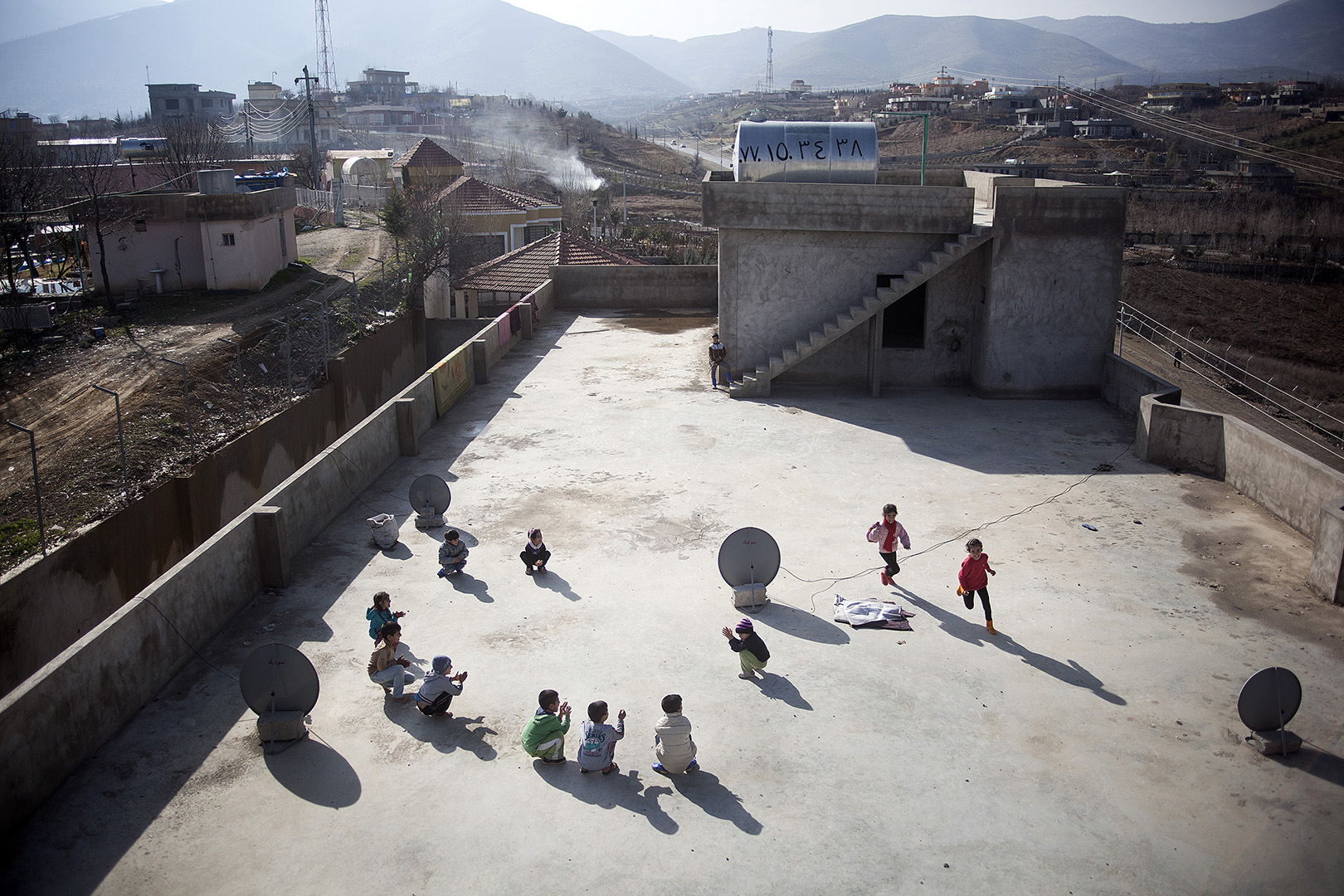 01/02/15. Sitak, Iraq. Children play on the rooftop of the unfinished building where they have been living with their families since August 2014, when they escaped from Sinjar.
+