On August 7th, 2014, ISIS overruns Qaraqosh, the largest Christian city in the Ninevah plains, and starts a fierce operation of ethnic cleansing. Most of the people belonging to ethnic and religious minorities flee to the Kurdistan Region of Iraq.

15/08/2014. Erbil, Iraq. Iraqi-Christian orphan brothers Milad (left) and Wissam are seen in at the house in Ainkawa where they are staying with their uncle.
+

One evening late in the summer of 2014 people from five villages in the province of Nineveh streamed onto the roads along with the orphans from Alqosh. Between their cars and ISIS stood only burning pyres of rubbish and an emptying no man’s land. Milad Hani, 9, and his brother Wissam, 11, were part of the exodus.

Along the highway the convoy came to a stop. Men in camouflage uniforms with dark eyes leaned into the car to check the travellers’ documents. Wissam thought they were from ISIS. He kept quiet and didn’t tell his younger brother he was scared; then he noticed the caps and badges of the Kurdish Peshmerga fighters and knew they were entering the Kurdish region. Milad, the younger brother, held his shoes on his lap “I didn’t have time to put them on,” he tells me softly.

When I visit the orphanage which is part of the Virgin Mary Monastery three months later, children are milling around on their way to and from the TV room. Milad and Wissam show me where they sleep in a room lined with rows of small chipped beds and a cross on the wall.

The boys are shy, polite and eager to please, calmly showing me around. Milad has broad limpid brown eyes and listens intently while we talk. Wissam’s brows are lower and more defined. He prefers to fidget and plays with a nearby camera to keep his hands busy. Their favourite possessions – a Barcelona football shirt for Wissam and the umbrella for Milad – were given to them by the surviving members of their family. When I ask them to recall what happened this summer they don’t remember fleeing the jihadists who came a few kilometres from Alqosh; but they do remember escaping to the home of their aunts, uncles and cousins in Erbil.

30/10/2014 Erbil, Iraq. Milad listens to his aunt Susan speaking to her husband Amir by phone, as he buys chicken for a farewell party being held for the brothers. Milad and Wissam will return to the orphanage in Alqosh the next day and start the new school year.
+ 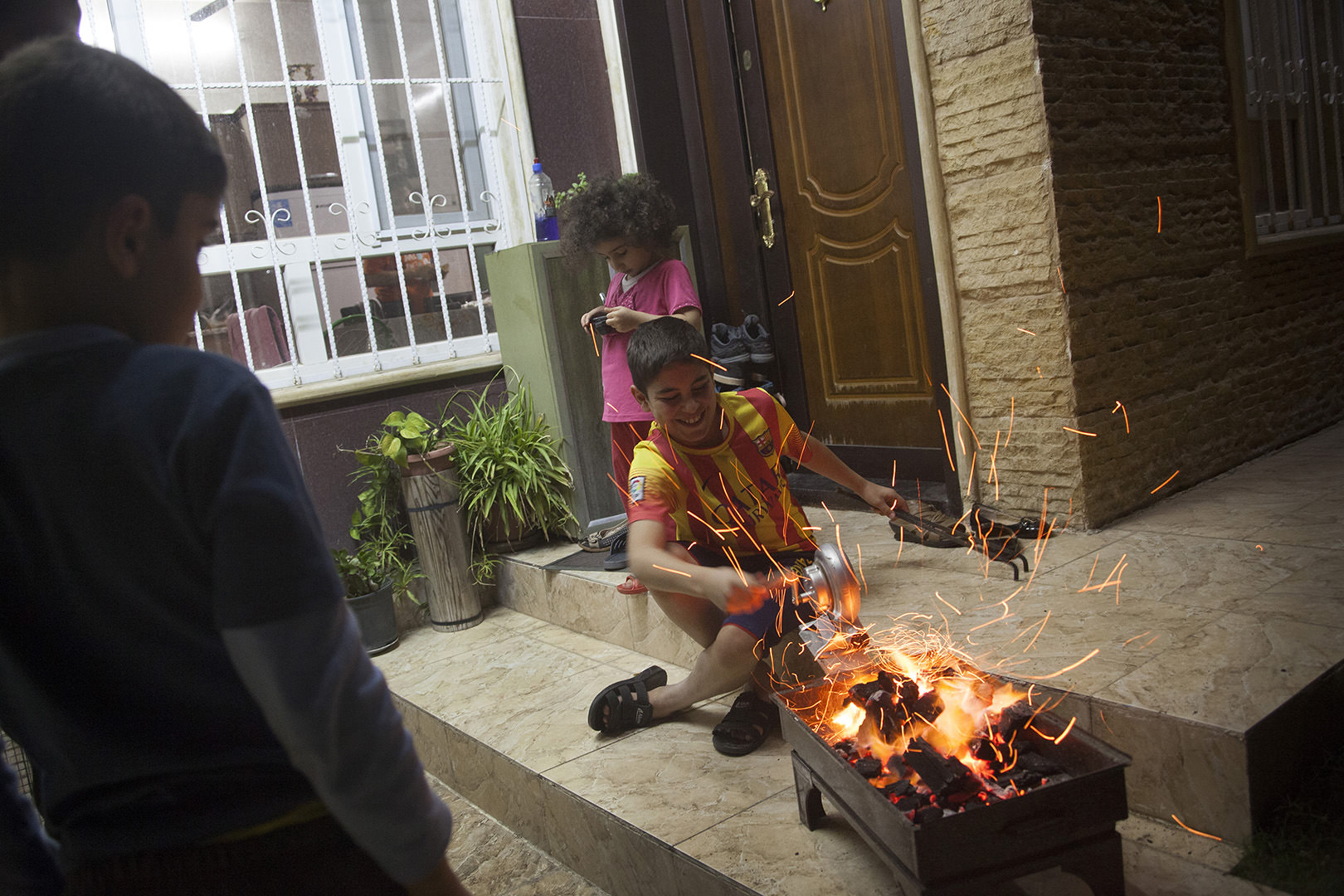 Wissam prepares a barbecue during the farewell party for he and his brother.
+

When the boys’ parents married in Baghdad, their mother Jamila – which means beautiful in Arabic – wasn’t expecting so many endings. Milad and Wissam were born just after Saddam was ousted as security across the country started to collapse. Explosions targeted churches and Baghdad began haemorrhaging its Christians; many fled north to towns that are now, almost ten years later, under ISIS control.

They moved to Erbil, the Iraqi Kurdish capital where the bombs didn’t reach, but after Milad’s birth there were arguments and the couple stopped getting along. Then their father Hani left for good. “He had a tendency to run away from problems at home; he would rather flee,” says the boys’ uncle Amer Solaqa.

Before her health started to decline at the end of 2012, Jamila worked as a cleaner in the marbled homes of Kurdish politicians to support the family. She didn’t want her children to see her losing strength so she sent them to the orphanage. In early 2013 Jamila died of breast cancer. When the priests told them what had happened, Milad decided that she must be in heaven; but Wissam was distraught, he cried and was angry. 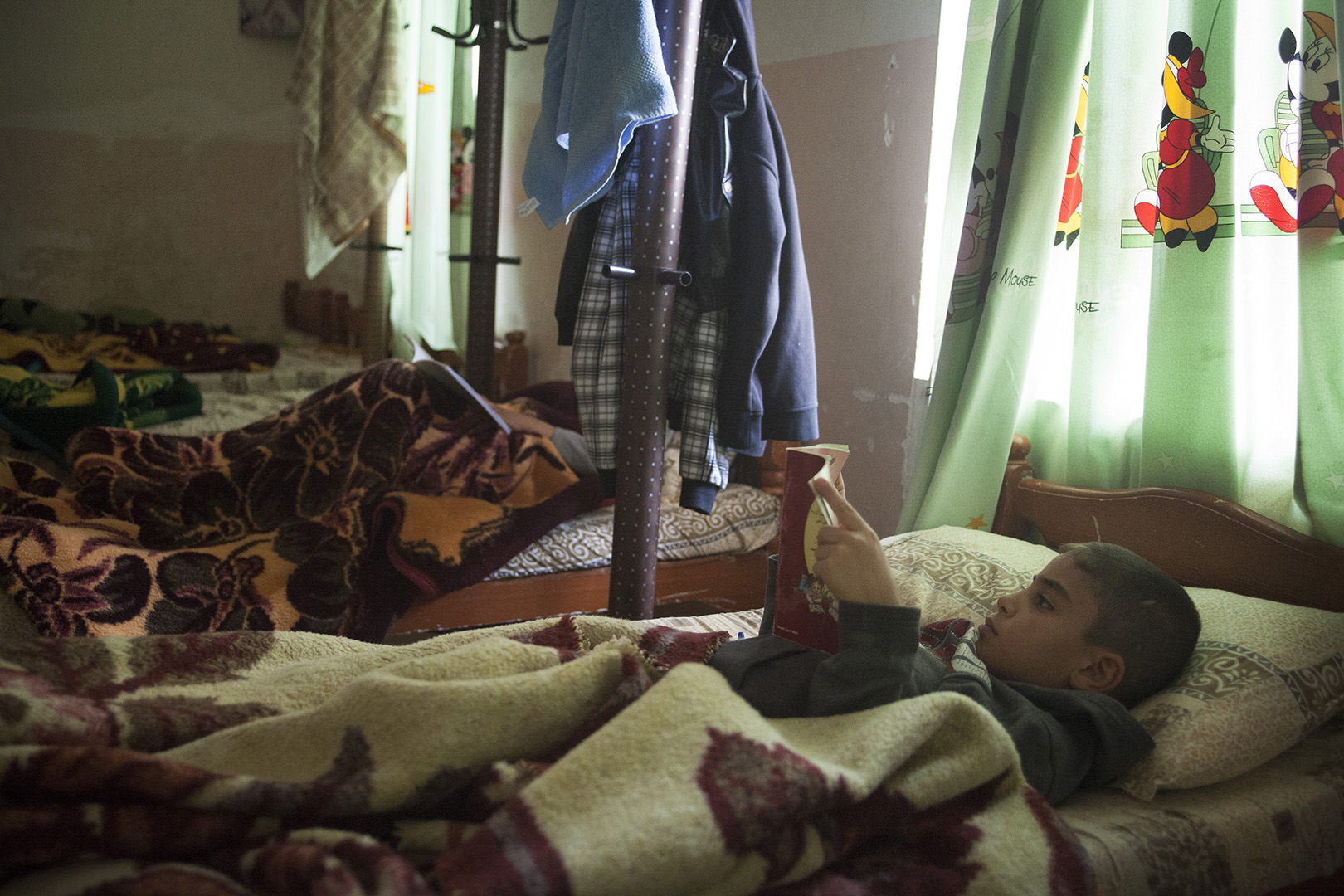 16/11/2014 Alqosh, Iraq. Milad reads a book in his bed in the dormitory. The children are allowed to stay in bed for longer because it is a Sunday. 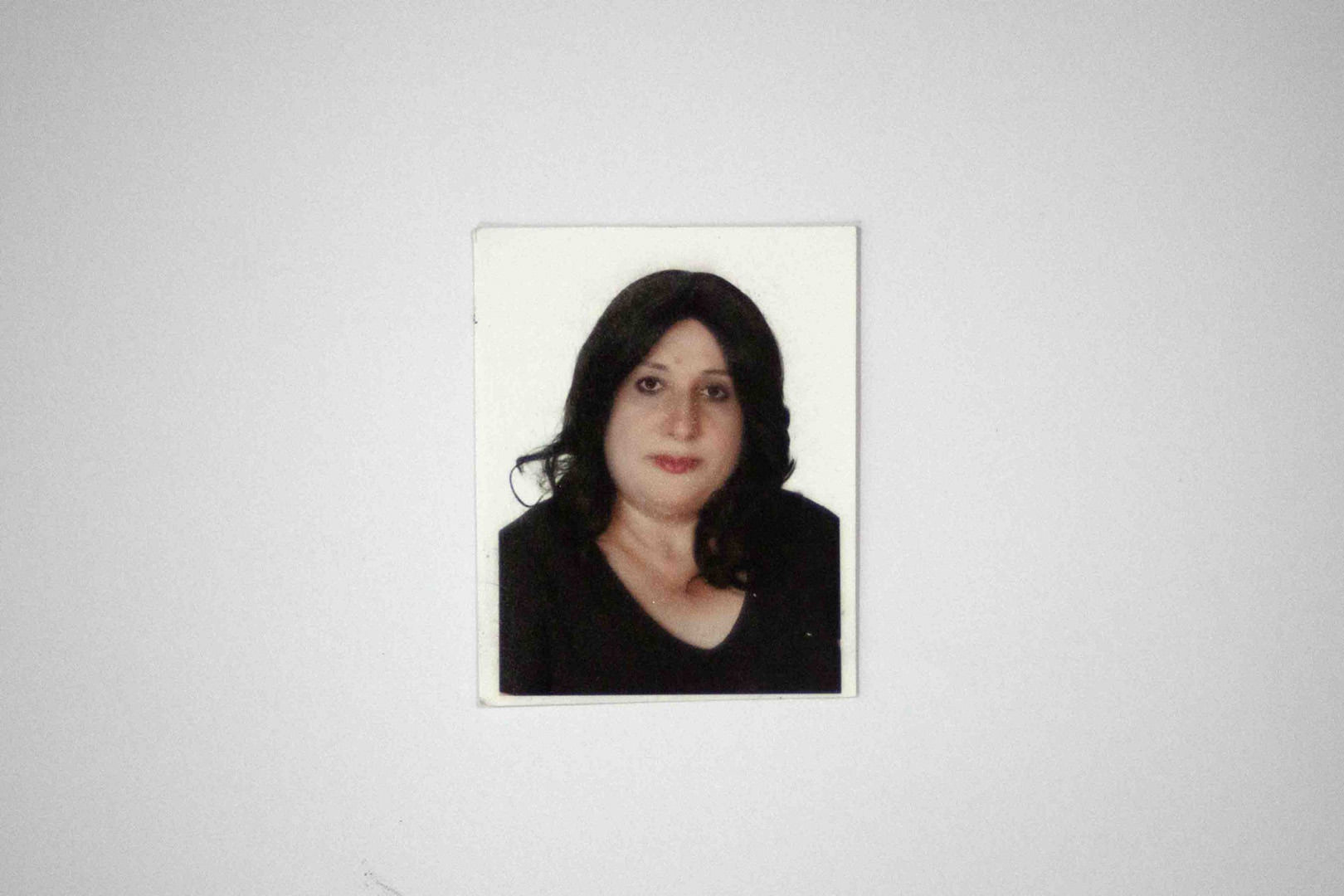 12/08/2015 Alqosh, Iraq. A picture of Jamila, the mother of Wissam and Milad, given to the boys’ by their older siblings. Jamila died in 2013 of breast cancer. . Alqosh, Iraq. Their day at school over, Wissam (centre, green trousers) and Milad (right, blue trousers) run for the bus that will take them back to the orphanage.
+

In the orphanage there is a picture of Jamila given to the boys by their older siblings. Below the fraying edges of the photograph Jamila’s face is round and pale with pencilled brows and tired eyes. Strokes of black hair fall by her face. “It was too painful for them to look at. So I took it from them and only show it to them once in a while,” Father Yousif, who runs the orphanage, tells me.

Built into the cliff face above the town is a narrow set of caves that make up the 7th century Rabban Hormizd monastery. From up there you can see down to the orphanage where the boys’ lives are made up of school, reading and prayers. 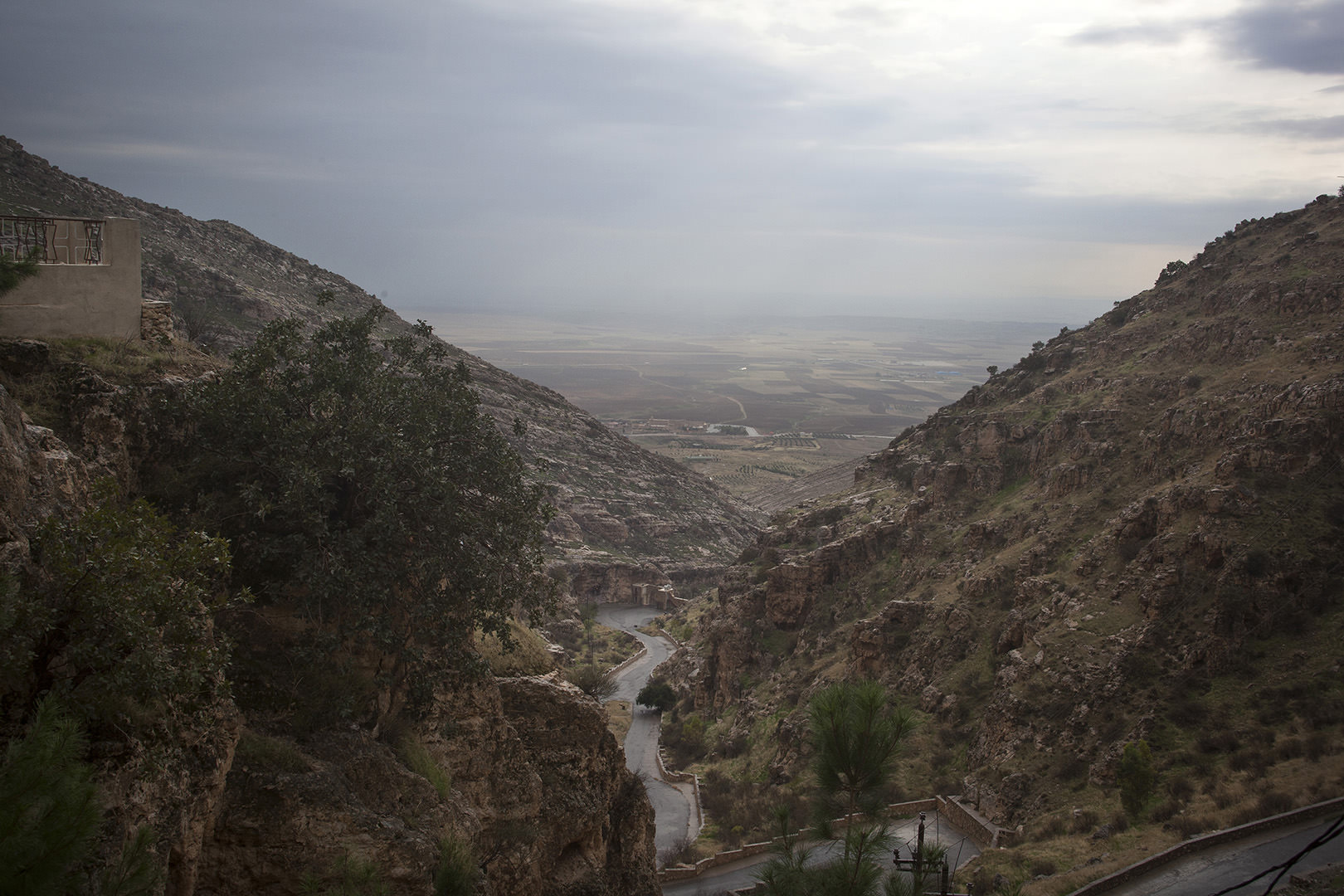 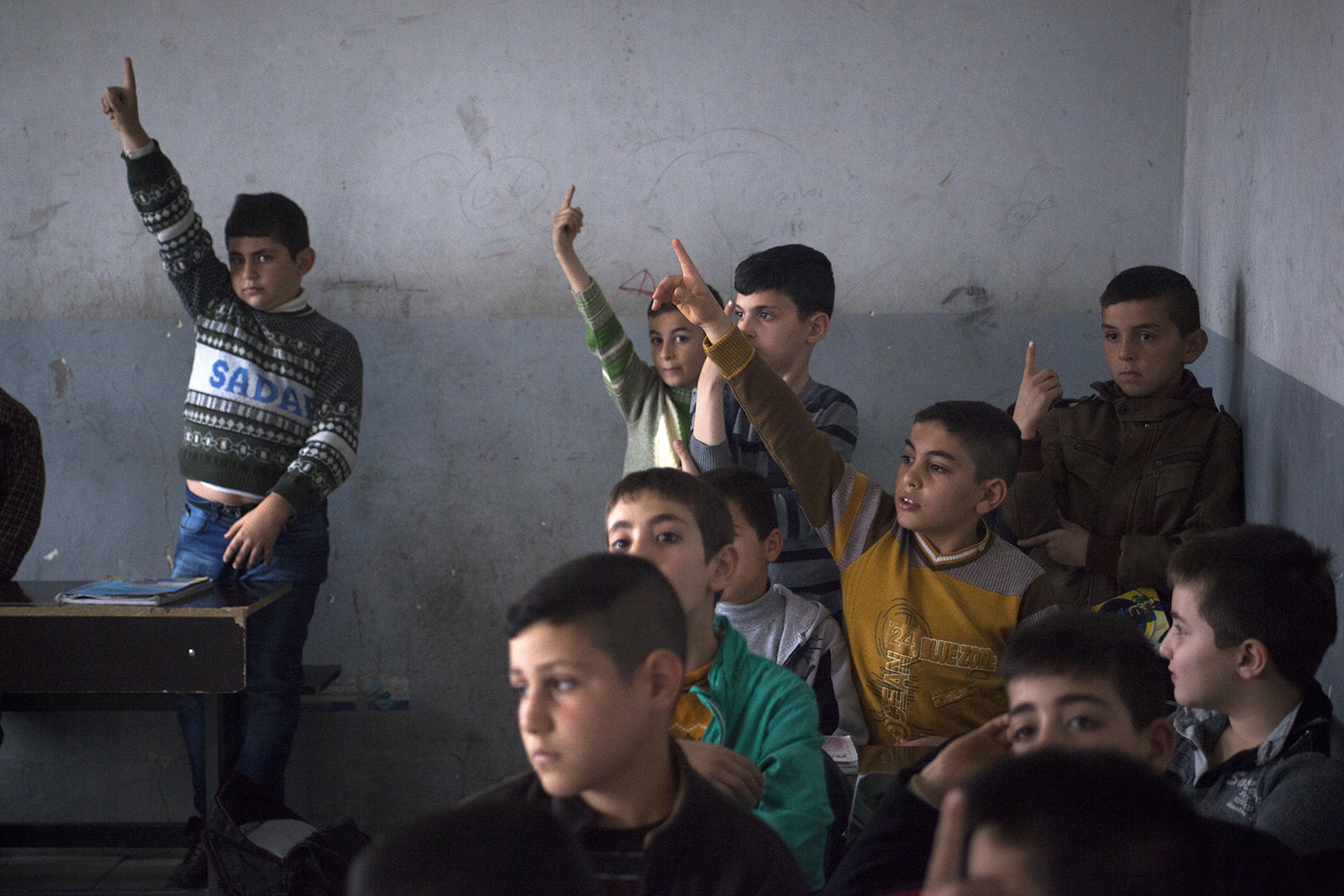 15/11/2014 Alqosh, Iraq. Wassam (centre right, yellow shirt) raises his hand to answer a question at the Alqosh School. Three of the children from the orphanage currently study at the school, which was founded in 1926.

On the narrow streets of Alqosh below the monastery, men stand in groups looking out at the grey plains where the fighting is taking place. They can’t see or hear the mortars or explosions, but they know they are sharing the same stretch of land under racing skies and many of them are making furtive plans to leave.

Father Joseph Abdul Saade sighs as we stand in the blustery courtyard of the church. Milad and Wissam are inside clearing up after a lunch of pounded bulgar with chunks of meat and oily rice. The meal was eaten almost in silence on long trestle tables. 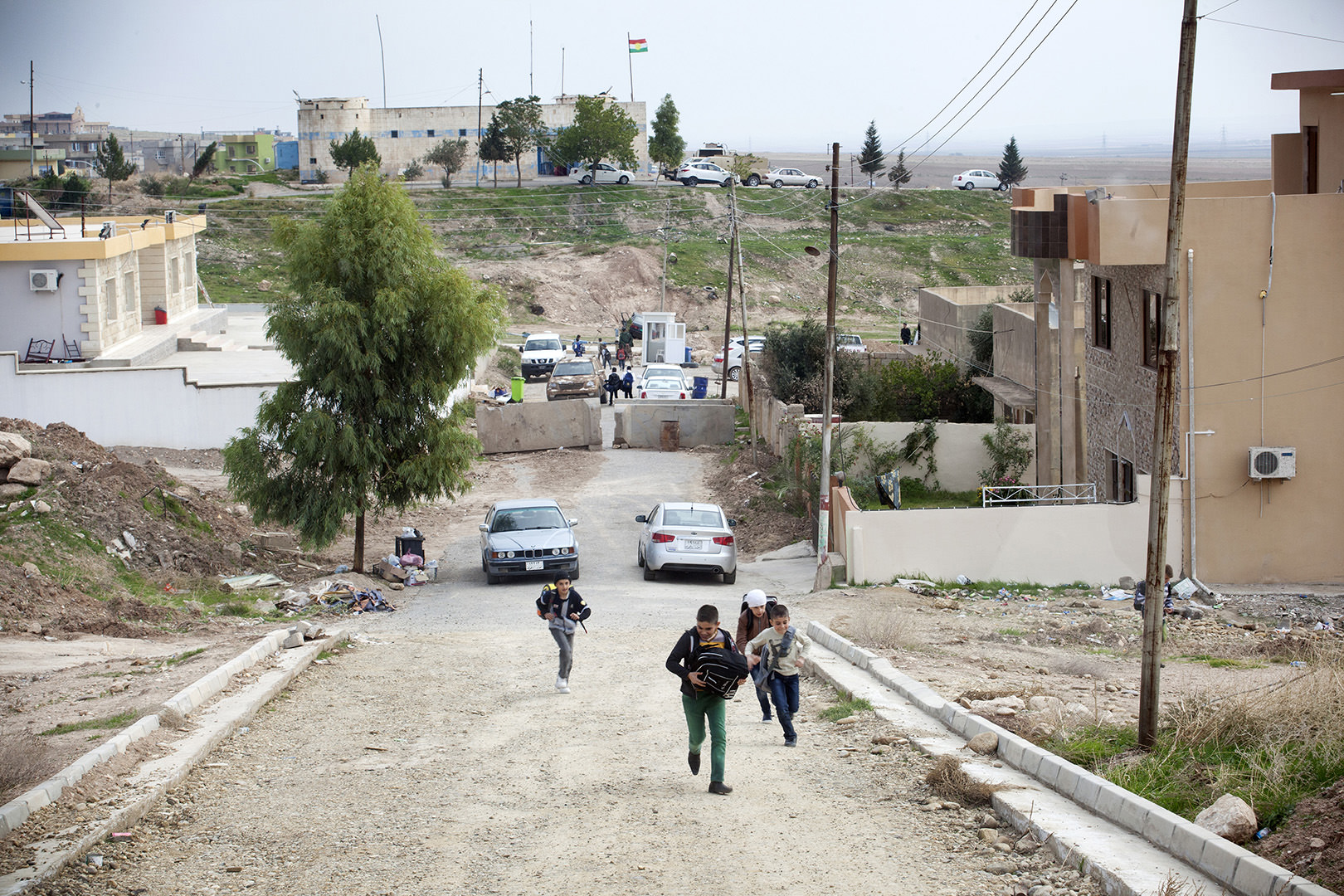 15/11/2014 Alqosh, Iraq. Their day at school over, Wissam (centre, green trousers) and Milad (right, blue trousers) run for the bus that will take them back to the orphanage.
+ 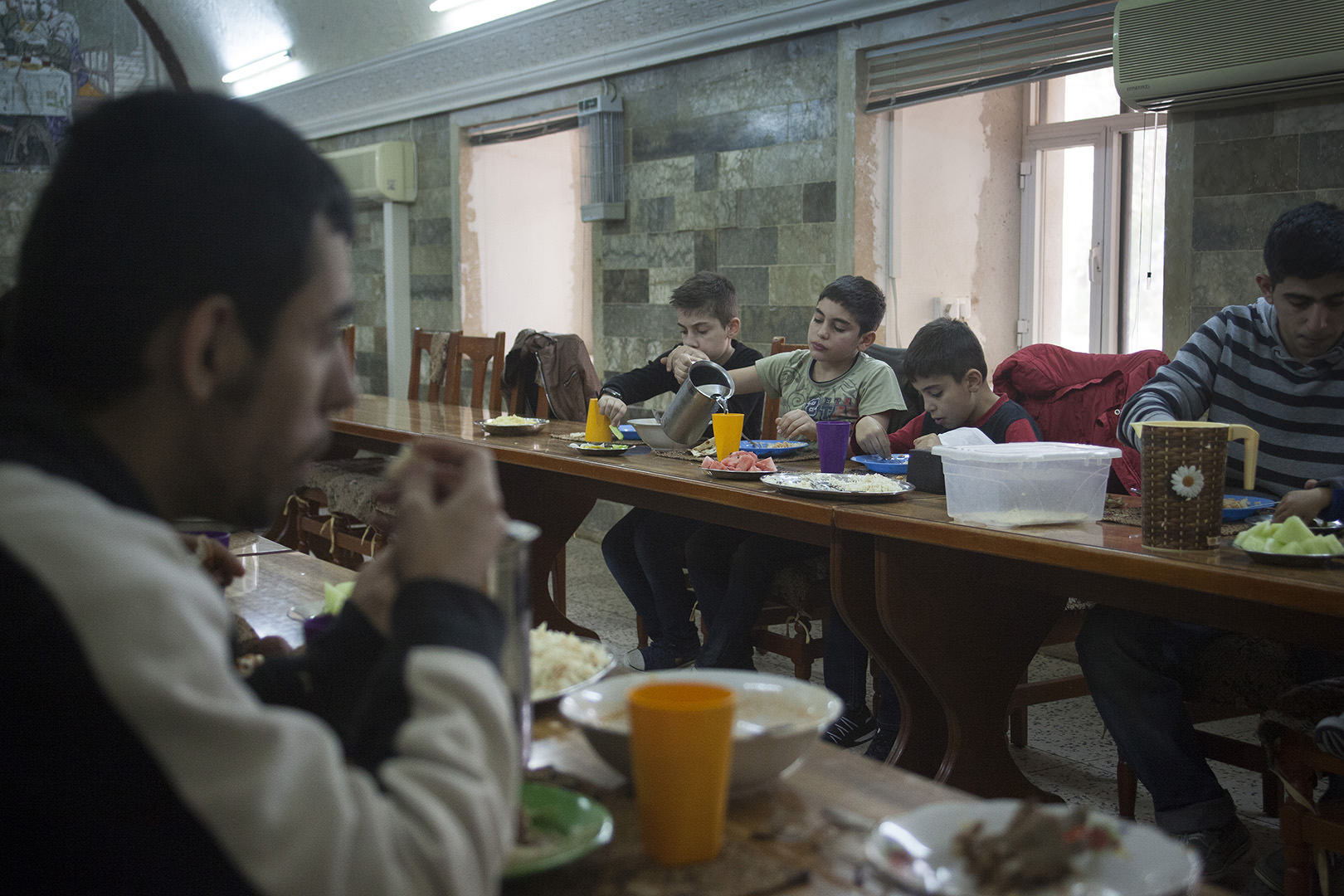 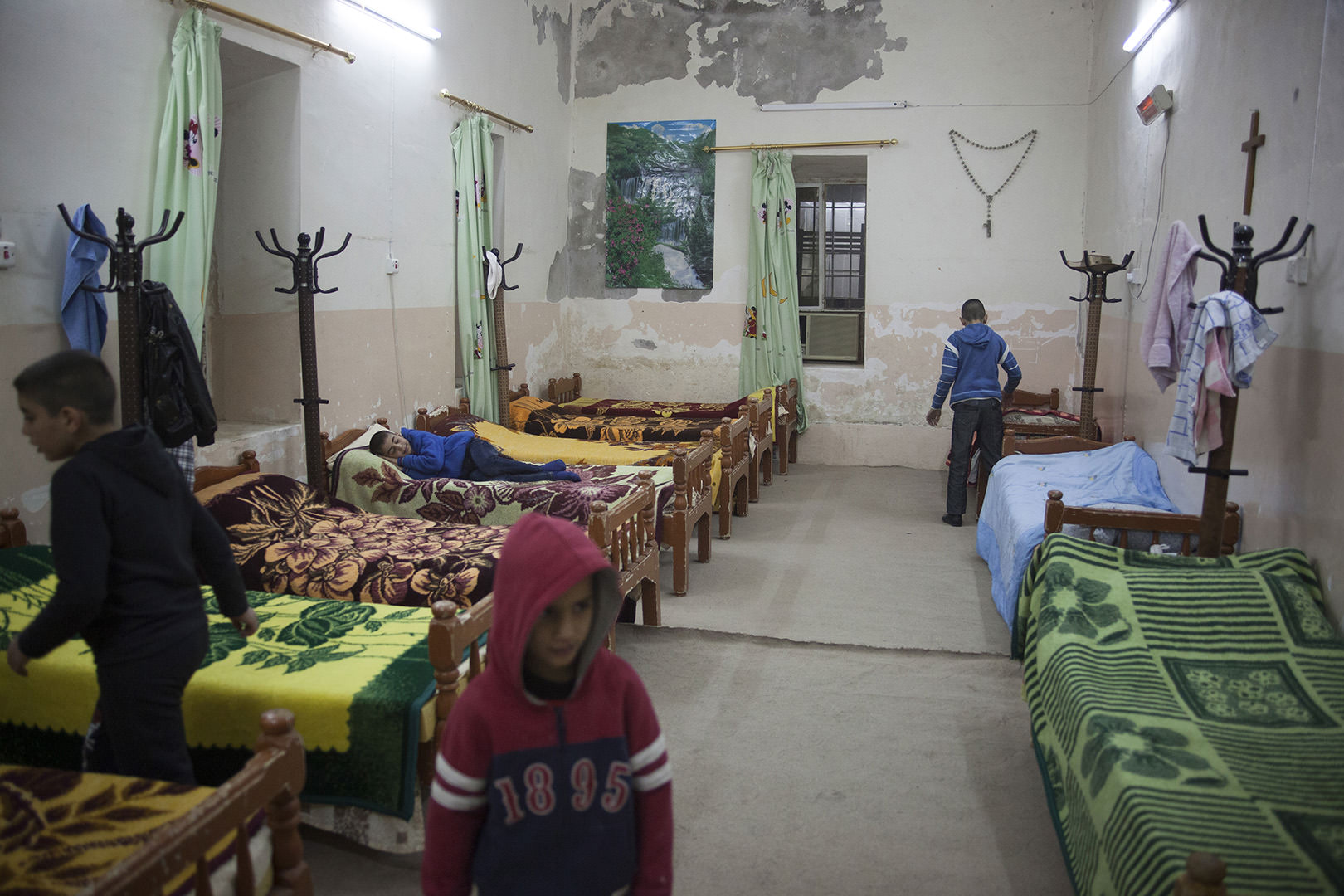 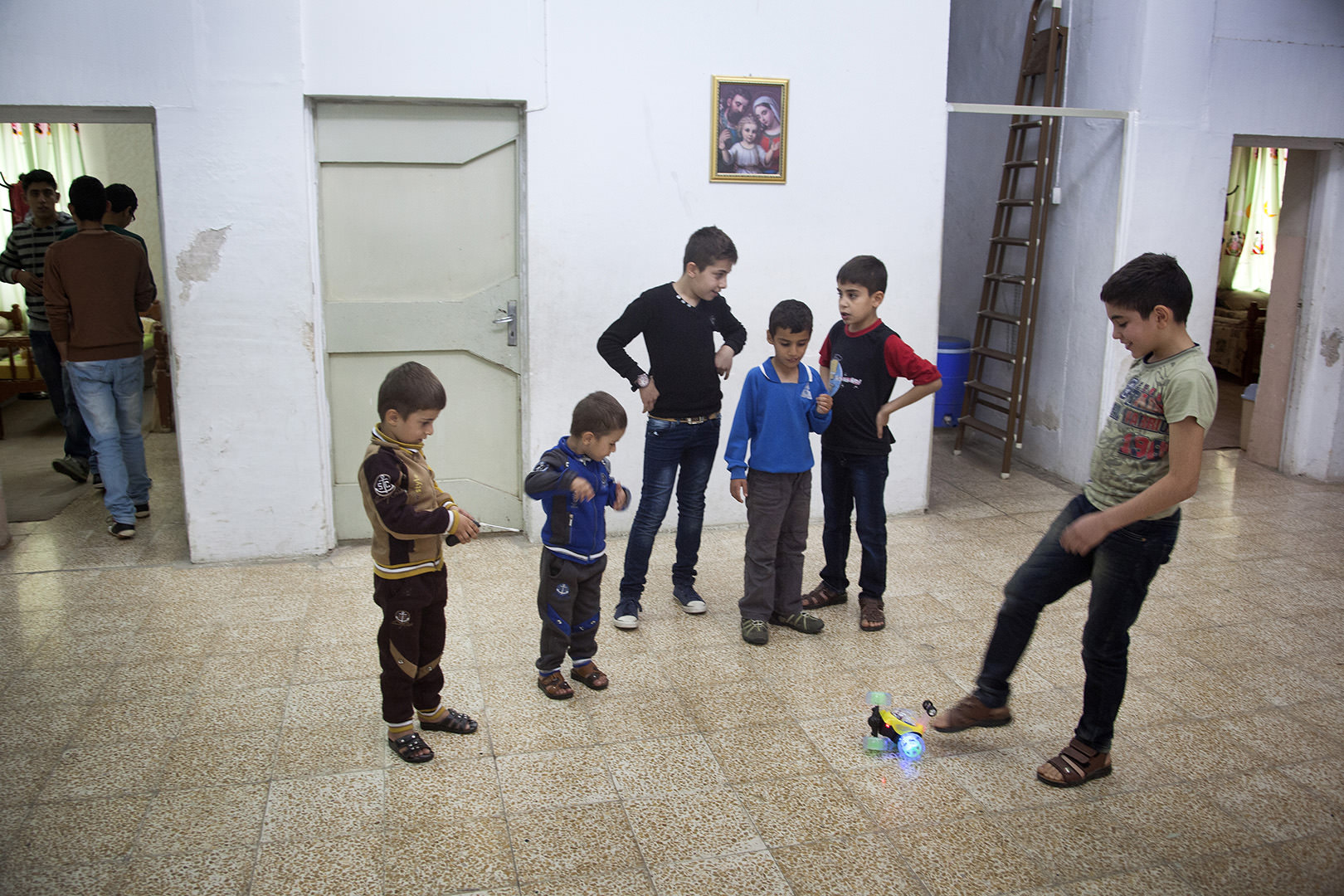 31/10/2014 Alqosh, Iraq. Wissam (right) and Milad (second right) stand with other orphans in a corridor of the orphanage. Milad gives his remote control car to new arrivals Kevin (left) and Christian Sufani (second left) to cheer them up as they have only recently become orphans.
+

“Safety?” the priest repeats back to me, standing in the wind outside the orphanage. “Feeling is one thing, faith is another. My human feeling is that we are not even fifty per cent safe. ISIS is 30km away.”

The priests insist their faith protects them, but when ISIS took over Mosul they announced a new Caliphate and gave an ultimatum to Christians in the city to leave, pay a tax, convert or “die by the sword.”

“Christians here don’t have the faith to stay and live with Muslims in Iraq,” says Joseph solemnly as the wind picks up. “They want to leave. I prefer them to stay but human logic says it is better to go, for you, for your kids. What will happen to our monastery if we leave? They will destroy it.” In August, he tells me, the priests took a thousand ancient manuscripts to the Kurdish city of Dohuk for safe keeping.

In the main hall of the orphanage paint is peeling from the wall behind an image of Christ. Budgerigars squawk as Milad passes; he notices his name tacked up on the list of house chores and darts off to help prepare lunch. On Sunday he will put on a flowing white robe and light candles in the Sunday service. 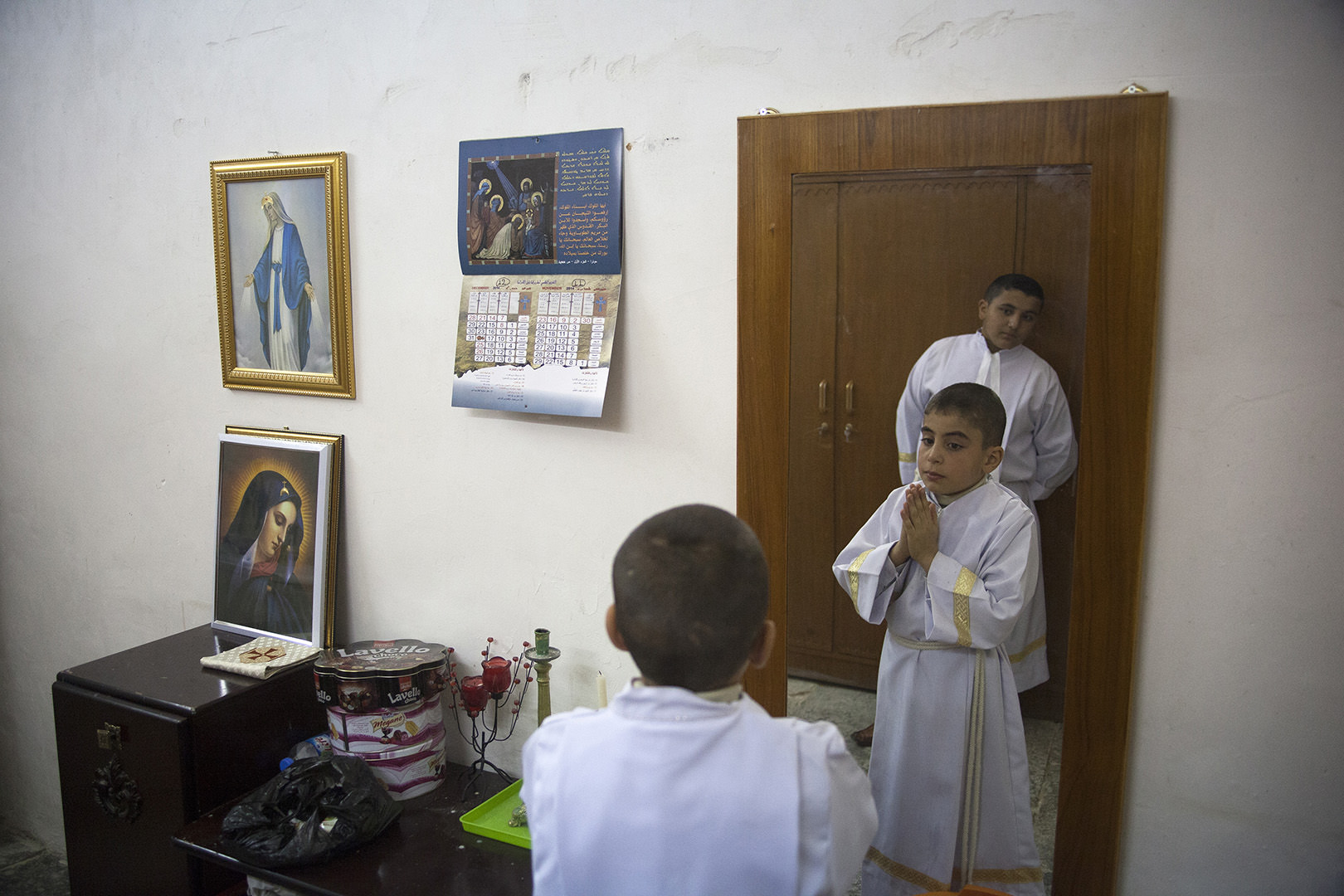 16/11/2014 Alqosh, Iraq. Watched by a friend, Milad prays inside the Der Saida Church. Every Sunday Milad helps Father Jobrail, a priest in the church at the Monastery, with his service.

16/11/2014 Alqosh, Iraq. Milad (left) holds and candle a Sunday service for orphans and residents of Alqosh in the monastery’s Der Saida Church.
+

Wissam is not as interested in following the rules as his brother, he tells me shrugging his shoulders with a slight smile. He loves playing football with the other children in Alqosh or outside his uncle’s house in Erbil where the boys stayed when they fled from ISIS. His uncles and aunts worry about him. He is sensitive and didn’t cope well with his mother’s death. He holds his feelings inside they say.

When I visited the house in Erbil which was also hosting other displaced Christian families, Milad was engrossed in computer games. He became animated when a picture of an ISIS fighter flashed up on the laptop screen showing the news of one of the battles. “He thought it was a monster,” his uncle Salam Hakeem tells me.

At the start of November the boys went back to the orphanage; the house in Erbil was overcrowded and school in Alqosh was starting again. The Kurdish fighters had pushed ISIS back beyond the town of Tel Skof, 17km away, regaining land lost in early August. US planes started dropping bombs on the militants and morale was higher. Wissam cried when he heard that he would soon have to leave. He had been helping uncle Amer in his tailoring shop, ironing clothes and collecting tips from customers and he didn’t want to return. 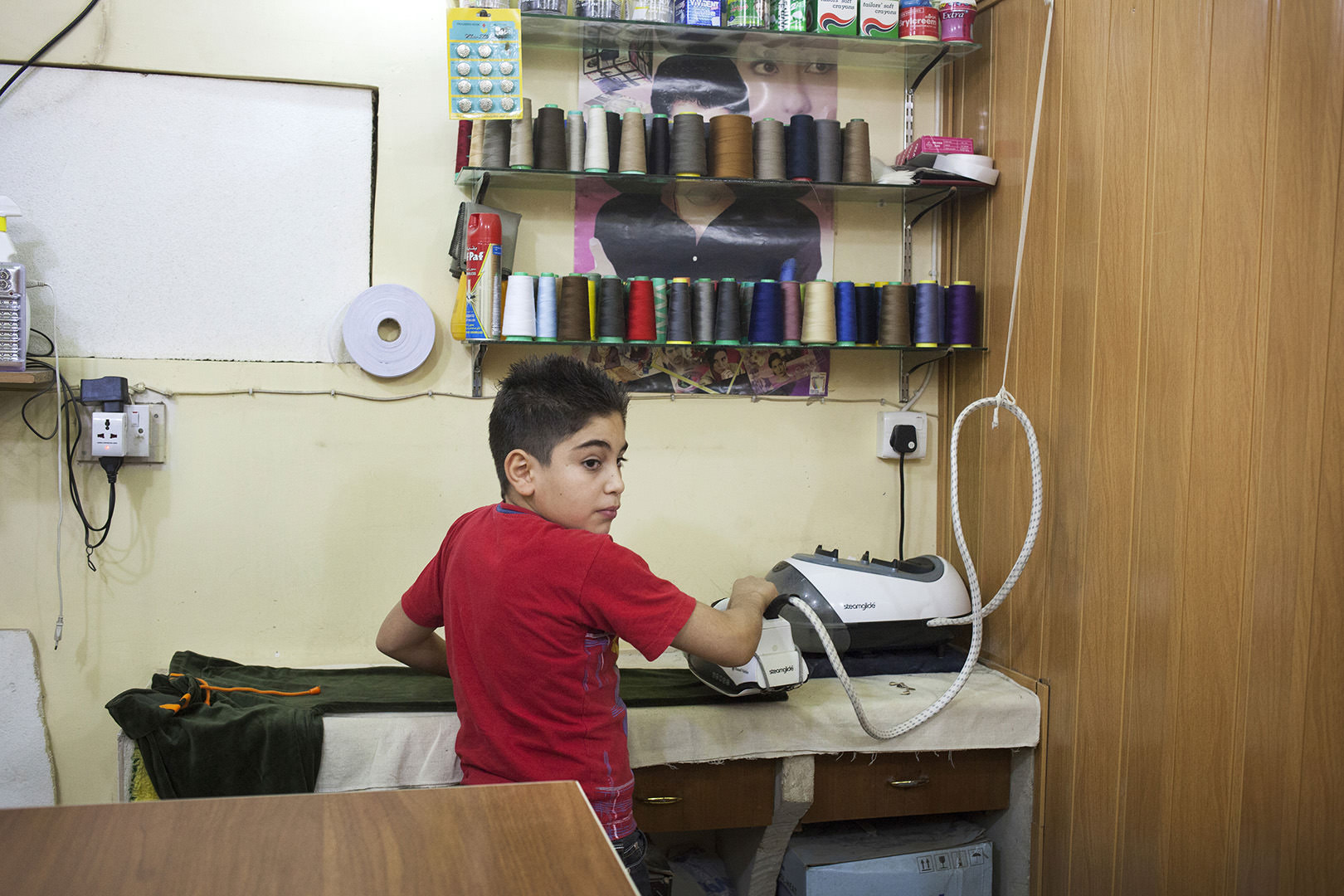 21/10/2014. Erbil, Iraq. Wissam irons a pair of trousers at his uncle Amir’s tailoring shop in Ainkawa. Wassam wants to visit the shop as his uncle works alone, and because he would like to learn about tailoring. 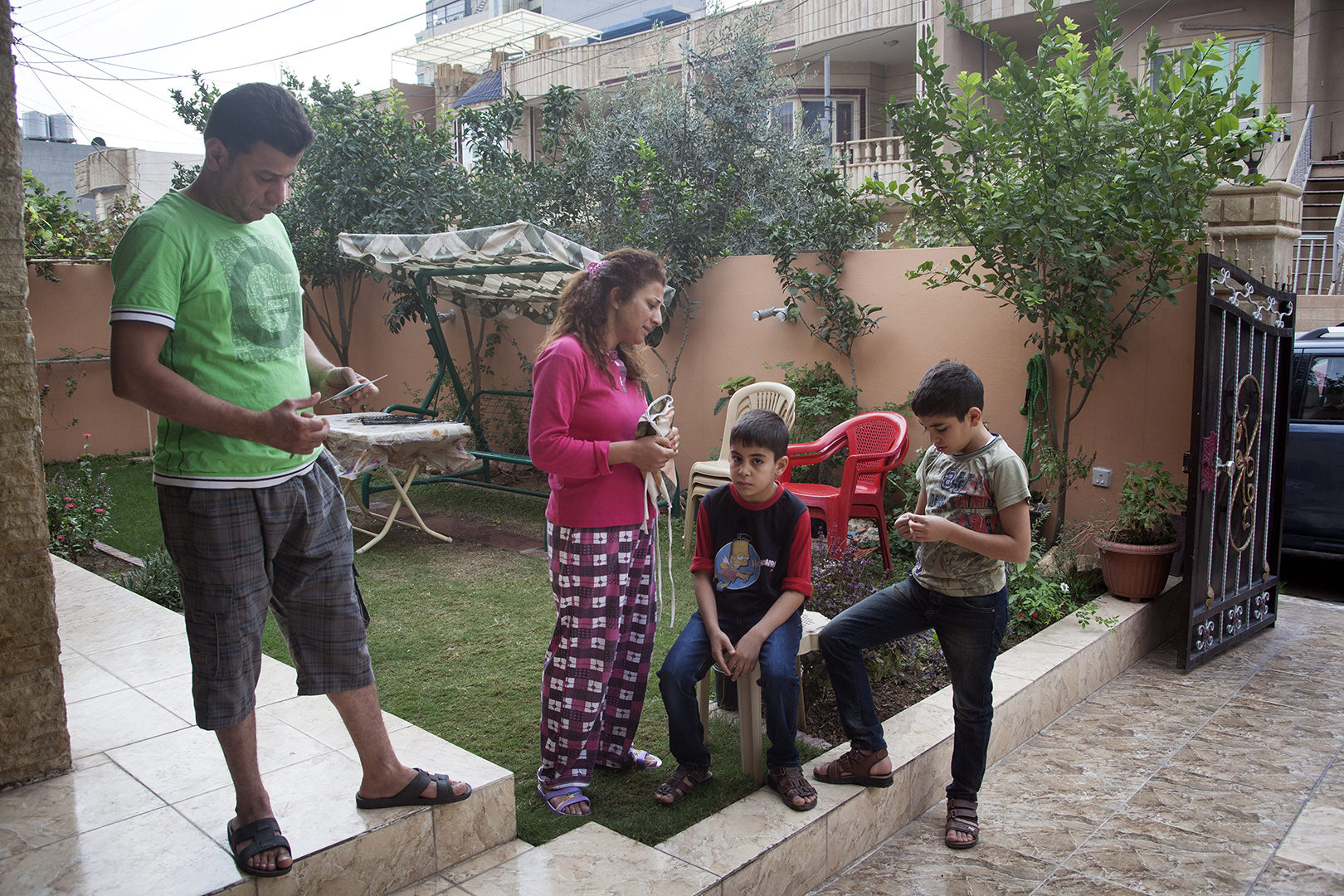 31/10/2014. Erbil, Iraq. In the early morning, on the day of the boys’ departure, Suzan speaks to Wissam and Milad and asks them to be good at the orphanage and keep on studying.

When Salam took the boys back to Alqosh he told me they seemed different. Milad and Wissam bent down to distract two younger orphans who had just arrived giving them their new toy cars to play with. “When they left the orphanage they were unstable, they didn’t know where they were,” he tells me, “but now they seem more mature.” This summer they fled war and ended up as part of a family again, but they still know how it feels to be without parents. 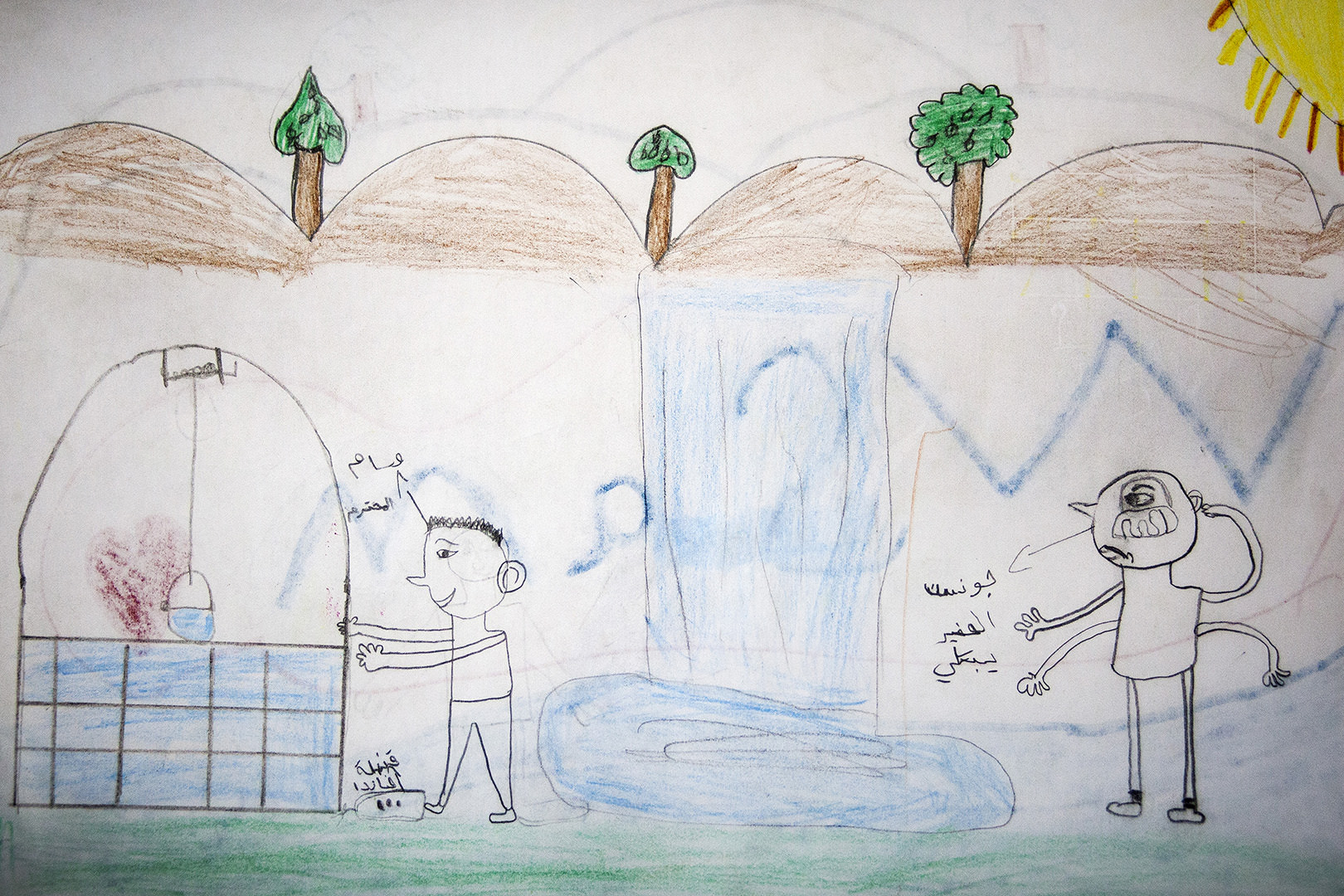 15/11/2014 Alqosh, Iraq. A drawing by Wassam, he says the picture depicts two friends. The character on the right is named Johnson and is crying because his friend Wissam (left) is about to step on a mine as he collects water for flowers from a well.
+

It is evening now in the orphanage and Wissam sits down in his dorm room and takes out colouring pens and pencils. Perhaps thinking of the fighting taking place not far away, he draws a scene that looks not unlike Alqosh with brown crayon hills and two children playing by a well. As one child steps forward, reaching out with cartoon hands, his foot touches the pencil outline of a bomb. In the background his friend screams out to him, his face is contorted with fear, but he is not heard.

Outside it is evening and the clatter of starlings has died down. Father Yousif, away from his charges and the other priests zips up his wind breaker and lights a cigarette, shielding the small flame with his hand. “Last night there was a football match on TV and we began to hear noises from the front line at Bashiqa, rockets and explosions,” he tells me. “Iraq and Kuwait were playing. The boys love football so we turned the TV up loud to drown out the sound.”

Just after my visit I find out that two more orphans have been taken to Jordan to join their families as refugees. The population is dwindling; those who can escape do, despite church leaders’ calls to stay.

“Where is my mother now?” the younger boy Milad asked his uncle Salam one day earlier this summer. “She is in heaven,” he said. Milad paused for a moment, thinking carefully before replying, “Can I go there?” 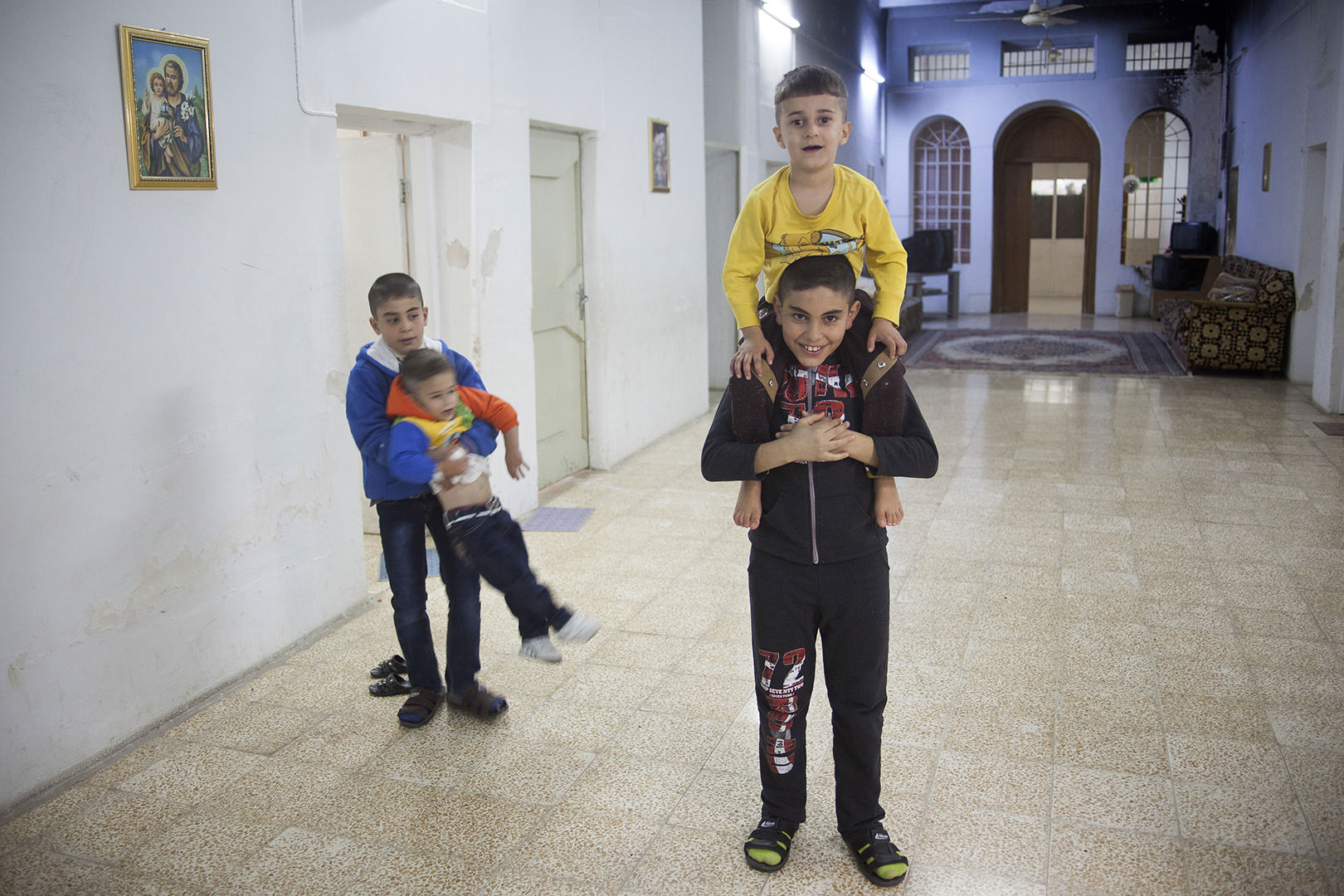